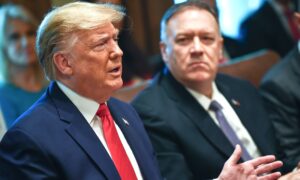 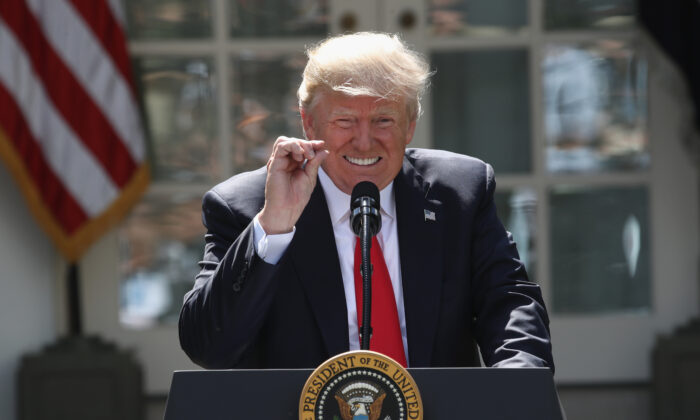 President Donald Trump announces his decision for the United States to pull out of the Paris climate agreement in the Rose Garden at the White House on June 1, 2017. (Win McNamee/Getty Images)
Viewpoints

Unfinished Business: Submit Paris Climate Agreement to Senate for Up or Down Vote

In what might be the final weeks of his administration, President Donald Trump can help seal his legacy by definitively freeing the United States from the shackles of the Paris Climate Agreement.

Meanwhile, presumptive president-elect Joe Biden has made it abundantly clear that he intends to take the country back into the Paris agreement, from which the United States formally withdrew on Nov. 4.

Agreed to by 189 signatory nations in December 2015, the Paris pact is the latest effort by the United Nations Framework Convention on Climate Change (UNFCCC) to address what it says is the urgent problem of rising temperatures caused by the burning of fossil fuels.

Under the agreement, developed countries committed to carrying out the lion’s share of reducing global greenhouse-gas emissions. And of those industrialized nations, none would carry a heavier burden than the United States, which Obama administration negotiators pledged would cut its emissions by about 25 percent by 2025, compared with 2005 levels.

U.S. participation in the agreement would cost the average family $20,000 and the national GDP $2.5 trillion by 2035, according to the Heritage Foundation. This sacrifice would be made to achieve a global reduction in temperatures of a barely measurable 0.015 degrees Celsius by 2100.

Meanwhile, China, the world’s biggest greenhouse-gas emitter, pledged to do little more than have its CO2 emissions peak in 2030.

Not prepared to squander America’s global leadership in fossil-fuel-based energy production, and deprive the country’s families and industries of affordable and reliable energy, Trump announced U.S. withdrawal from the pact in June 2017.

He did so, however, in the worst possible way, one that provides a future president a pathway to push the United States back in. What Obama administration representatives negotiated in Paris was a de facto treaty, but one they branded an “agreement” to avoid having to send the document to the Senate, where it faced certain rejection.

The Constitution provides that the president “shall have the Power, by and with the Advice and Consent of the Senate, to make Treaties, provided two-thirds of the Senators present concur” (Article II, section 2).

By circumventing the Constitution’s requirement that a treaty receives the Senate’s approval by a two-thirds majority (67 votes today), the Obama White House sought to unilaterally bind the country to the narrow (if far-reaching) interests of global green elites.

What Trump should have done in the summer of 2017 is exactly what the Constitution provides: send the treaty to the Senate for its advice and consent. Instead, he followed a procedure laid out in the agreement that allows signatories to exit the pact within a certain time. For the United States, that day of exit fell on Nov. 4, 2020, one day after the election.

The Consequences of Re-entry

But it’s not too late to correct the mistake. The upcoming lame-duck session of Congress will provide the president the opportunity to rid the country of the Paris pact once and for all. Failing to do so runs the risk of subjecting Americans to even greater burdens than were detailed in the original December 2015 document.

Under the agreement, signatory nations must update their commitments every five years. That update falls due in January 2021. A Biden administration eager to rejoin the climate deal is likely to encounter demands that it strengthen its emissions-reduction commitments. In other words, the United States would have to buy its way back in by imposing new and more restrictions on the production and use of fossil fuels. Given Biden’s openly expressed hostility to oil and natural gas, his administration wouldn’t hesitate to make such promises.

Reentry would also entail UNFCCC members extracting a pledge from Washington to provide taxpayer money for the UNFCCC’s Green Climate Fund created in 2014 to help poorer countries combat climate change. After the Obama administration poured $1 billion into the fund, the Trump White House refused to provide any financing.

Just as important is how reentry into the Paris agreement can be used against American companies. U.S. manufacturers, for example, could find themselves the focus of lawsuits filed by environmental activists alleging that their facilities’ emissions are in violation of an international agreement, of which the United States is a signatory.

In an ironic twist, greenhouse-gas emissions generated by the U.S. economy will fall 9.2 percent in 2020, plunging to the lowest levels in at least three decades, according to a just-released study by BloombergNEF.

That puts the United States on track to meet the commitments Obama officials made in Paris five years ago and occurred even after accounting for the excess carbon dioxide pumped into the air by this year’s wildfires along the West Coast and the Rocky Mountains.

U.S. CO2 emissions may rise somewhat once the economy recovers from the COVID-19 restrictions. But emissions were already declining before the pandemic struck, because of power plants switching from coal to cleaner-burning natural gas. By contrast, most European countries, including Paris agreement supporters Germany and France, already were struggling to reach their emissions goals before the outbreak of the coronavirus.

From the outset, Trump saw America’s rise to the world’s leading producer of oil and natural gas as a strategic asset to be used against such rivals as China, Russia, and Iran. Rejoining the Paris agreement would nullify the geopolitical gains America’s fossil-fuel abundance has made possible.

This doesn’t have to happen, and sending the agreement to the Senate is the best way to ensure that it doesn’t.