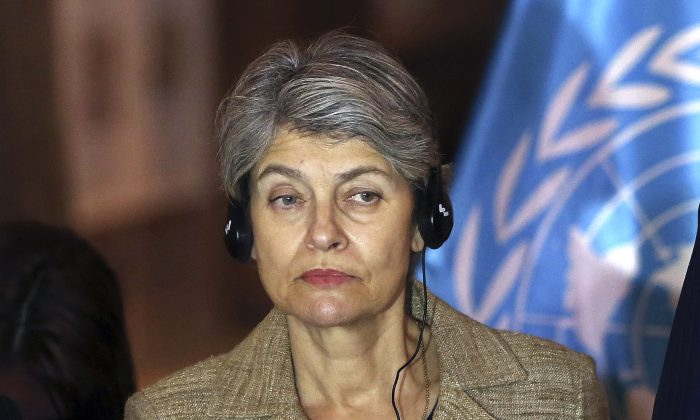 Irina Bokova, the Director-General of the United Nations Educational, Scientific and Cultural Organization (UNESCO) listens to a question during a press conference at the Iraqi National Museum in Baghdad, Iraq, on Nov. 2, 2014. She’s already the first female and Eastern European to head UNESCO, and could be the first female and Eastern European United Nations secretary-general, too - if her government gets its way and she wins support from the five U.N. Security Council members. (AP Photo/Khalid Mohammed)
Middle East

PARIS—The head of UNESCO is calling on the U.N. Security Council to adopt a ban on the illicit trafficking of cultural objects from conflict zones in Iraq and Syria.

Ahead of a conference on endangered heritage Wednesday, Irina Bokova told The Associated Press the trafficking of objects obtained through illegal excavations in both countries is an industry now worth between $7 billion and $15 billion.

“(A U.N. ban) is critical in order to curb the financial flows, because there is the other dark side of this process: that extremists are using this money to fund their activities,” she told the AP.

“If the international community and the Security Council want to stop the financing of the terrorists, they need to look also at the trafficking of objects of art,” she said.

The 3 1/2-year-long civil war in Syria has killed more than 200,000 people and touched off a massive humanitarian crisis, forcing more than 3 million to seek refuge abroad and displacing another 6.5 million within the country. Meanwhile, the Islamic State group has seized most of the border crossings between Iraq and Syria and overrun large parts of both countries.

Antiquities officials there have warned of a disaster as the region’s history is erased. When Islamic State militants besieged Iraq’s northern city of Mosul and surrounding areas in June, they captured a region where nearly 1,800 of Iraq’s 12,000 registered archaeological sites are located. In both Syria and Iraq militants have demolished relics, pillaged sites and sold relics on the international black market.

The heritage conference, which is attended by the U.N.’s representatives for Syria and Iraq and being held at the U.N. cultural agency’s Paris headquarters, aims to find solutions to preserving endangered heritage in the region, including Syria’s Aleppo and Iraq’s Sufi Sheiks tombs.

UNESCO has started working with Christie’s and Sotheby’s in an attempt to stop illicit artifacts from war zones going under the hammer at auctions in the West.

The heritage concerns will also bring a rare instance of round table talks between the warring factions within Syria.

Experts from both sides of the Syrian conflict — the Western-backed Free Syria Army rebel group and Bashar Assad’s Syrian government — will meet as part of a Beirut-based observatory group mediated by UNESCO and funded by the European Union to find common ground in protecting Syrian sites.

The meeting will also try to establish “safe places” to safeguard heritage in the area.

From The Associated Press. AP writer Zeina Karam in Beirut contributed to this report.