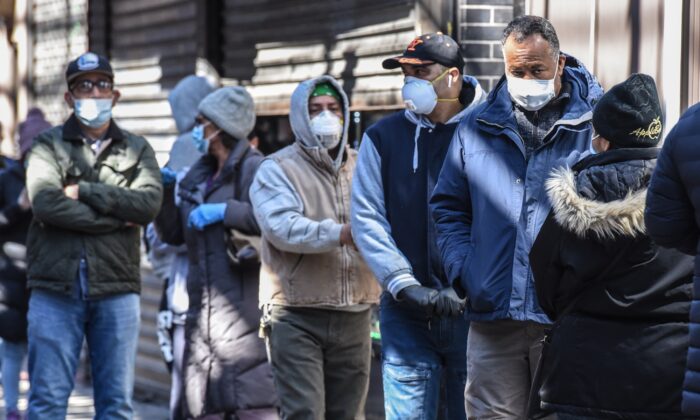 The previous insured unemployment rate was 8.2 percent for the week ending April 4, which, when announced last week, broke the previous record of 7.0 percent set in May 1975.

While the newly announced 4.43 million jobless claims number is lower than the record-setting 6.9 million claims filed during the week ending March 29, it brings the total unemployment claims filed in the last five weeks to an astounding 26 million, wiping out all jobs created since the 2008 financial crisis and then some.

The longest-ever employment boom in U.S. history started in September 2010 and added some 22 million jobs. It was cut short in February by a shutdown of much of the economy alongside strict social-distancing measures put in place after the outbreak of the CCP virus, commonly known as the novel coronavirus.

“The U.S. economy is hemorrhaging jobs at a pace and scale never before recorded,” said Scott Anderson, chief economist at Bank of the West in San Francisco. “It compares to a natural disaster on a national scale.”

The new jobless claims report comes on the heels of dismal data last week showing a record drop in retail sales in March and the biggest decline in factory output since 1946.

As a once-vibrant economy has been brought to a standstill by measures to curb the spread of the virus, surging unemployment, and other dismal economic data have fueled tensions. In at least 10 states so far, rallies have been held to protest lockdowns that have upended nearly every aspect of the day-to-day lives of Americans.

“My anxiety is through the roof right now, not knowing what’s going to happen,” said Laura Wieder, who was laid off from her job managing a now-closed sports bar in Bellefontaine, Ohio.

Speaking at a virtual question-and-answer session on April 15, International Monetary Fund head Kristalina Georgieva said that the outbreak “is a crisis like no other” and that it has sparked the worst global recession since the Great Depression.

Still, in her remarks, the IMF head struck a hopeful note, insisting the crisis will eventually pass and urging governments to adjust policies to give economies the best chance for a quick bounce-back.

Still, many economists believe there will be further downside for the labor market.