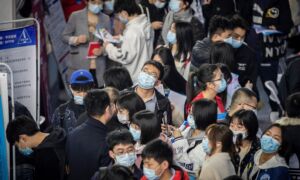 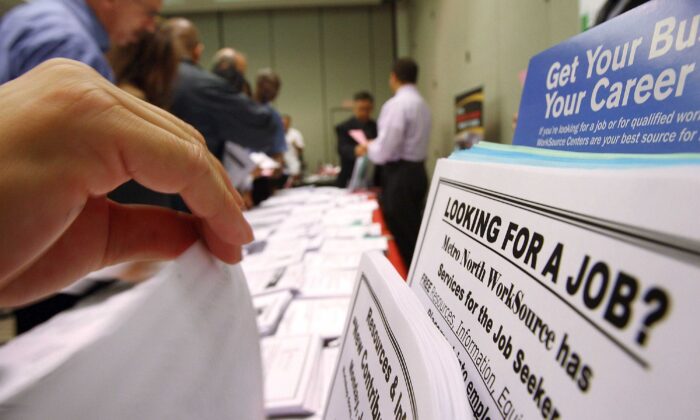 Initial jobless claims dropped below 300,000 for the first time since the beginning of the COVID-19 pandemic, when lockdowns were commonplace, according to a report released by the Labor Department on Oct. 14.

The claims, which analysts often tie to layoffs, decreased to 293,000 last week, as compared with 329,000 a week earlier, the agency stated. The four-week moving average for unemployment claims fell to 334,250—the lowest since March 2020.

Overall, approximately 3.6 million people were receiving some sort of jobless benefits during the last week of September.

The federal government reported on Oct. 8 that nonfarm payrolls increased by only 194,000 jobs in September, the fewest in nine months. The cooling in employment growth is mostly due to a dearth of workers, as well as skills mismatches, with government data showing on Oct. 12 that there were 10.4 million job openings at the end of August.

Labor shortages associated with the COVID-19 pandemic are also prevalent in other economies. With COVID-19 infections driven by the Delta variant declining and schools fully reopened for in-person learning, there’s hope that more Americans will rejoin the labor force.

“Employers are trying to figure out how to attract job seekers, and it’s challenging,” AnnElizabeth Konkel, an economist with the job website Indeed, told The Wall Street Journal.

Data show that Americans are quitting their jobs at record levels. According to the Labor Department in a report this week, approximately 4.3 million workers quit their jobs in August, which is the highest on record tracing back to 2000.

Workers who voluntarily quit their jobs aren’t eligible for unemployment benefits. Workers quitting their jobs means that employers may not need to lay off other employees—which would then drive down unemployment claims.

The historically high rates at which Americans are quitting their jobs is a sign of worker confidence in the job market.

The quits report released by the Labor Department earlier this week “shows employers and workers were anxious about the rising Delta COVID-19 wave two months ago,” Robert Frick, corporate economist at the Navy Federal Credit Union, stated in a note obtained by several news outlets.

“Workers quit, especially in retail, at a record rate to avoid exposure to possible infection. Job openings dropped, especially in leisure and hospitality, as travel dropped markedly due to Delta,” Frick wrote.

The labor crunch could diminish even more in the coming months after the expiration of expanded unemployment benefits in early September.

The scarcity of labor has triggered bottlenecks in the global supply chain, as there are fewer employees to ship goods to markets and produce raw materials.