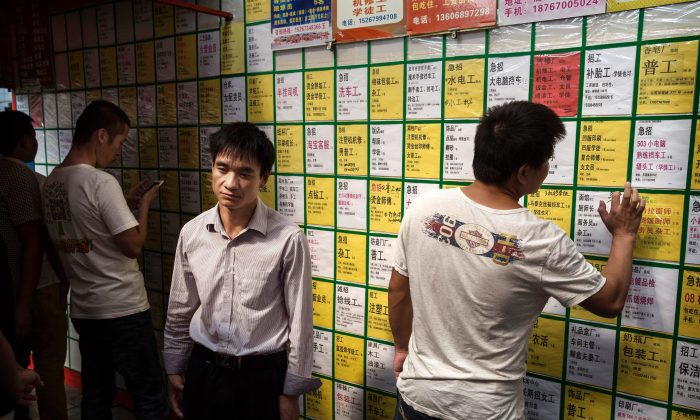 Men look at job postings on a bulletin board at a centre in Yiwu in Zhejiang Province, China on Sept. 18, 2015. (Kevin Frayer/Getty Images)
China

If you are looking for a single word to summarize China’s economic situation in the year just gone by, it is “unemployment.” The flood of bankruptcies, flight of foreign investment, 300 million migrant workers losing their jobs, the government forcing troubled state-owned corporations to remain open, its giving jobs to veterans, and policies encouraging migrant workers to return to their hometowns to start new enterprises—these are all about unemployment.

China’s coal and steel industries have been the country’s biggest employers. The coal industry workforce used to be over 5.8 million, and steel employed another 3.3 million. Bankruptcies of businesses in these two industries will inevitably lead to massive unemployment.

On Aug. 24, 2015, the State Council issued a briefing of an investigation into the risks in the coal mining industry and how to manage them. The report stated that 4,947, or 48 percent, of Chinese coal mines have shut down or stopped production. In other words, nearly half of China’s coal production has closed. Shaanxi, Shanxi, Inner Mongolia, and other coal-rich provinces are seriously affected. In Inner Mongolia, which has the country’s largest coal reserve, half of all mines have shut down or are in a state of suspension. As a result, more than 100,000 people have become unemployed. The coal industry depression began in 2013; many companies struggled to hold on until now, but they can survive no longer.

The situation in the steel industry is similar. Serious excess capacity has led to low profits through the entire industry. According to insiders, there is a five-year inventory stockpile of all types of steel. In early August, the price of steel was at 1,800 yuan ($273) per ton, or 0.9 yuan ($0.14) per pound—cheaper than cabbage.

This is a snapshot of China’s economic slowdown and weak industrial demand. Industry professionals say that things will get even worse for the steel sector. At present, China has 2,460 steel companies. This number is expected to eventually drop to 300. This indicates that more than 80 percent of businesses are up for mergers and acquisitions, and in the next three years the steel industry will go through a process of restructuring and elimination.

World Factory Moves to Other Countries

In recent years, with the rise of labor costs in China, many companies have moved their factories to Vietnam, India, and other Southeast Asian nations so as to maintain their profit margins. According to data from the Asia Footwear Association, one-third of orders from Dongguan, known as the “shoe capital,” has moved to Southeast Asia. Having been a main workshop of the “world’s factory,” Dongguan’s decline began in 2008, with 72,000 enterprises closing in the next five years. In 2014, no fewer than 4,000 businesses closed. In October 2015, more than 2,000 Taiwan-funded enterprises left Dongguan, and ­five million workers were laid off.

The following three separate sets of data most likely come close to providing a true picture of unemployment in China.

In 2010, then Vice Premier Zhang Dejiang stated that 45 million jobs in China were created by foreign companies. With supporting businesses also included, foreign investment has provided over 100 million jobs in total. This matches the number mentioned by Justin Lin during the World Economic Forum in January 2015. Lin said that China would lose 124 million jobs if the entire manufacturing sector moved out of China.

Prior to 2010, there was already a huge unemployed population in China. On March 22, 2010, former Prime Minister Wen Jiabao told U.S. representatives at the 2010 China Development Forum: “The U.S. government is worrying about two million unemployed people. But China is facing the pressure of 200 million unemployed workers.”

Miss Lu Tu, a researcher of China’s migrant worker population—that is, those whose homes are in the countryside, and who work in the cities and live in shantytowns due to residence restrictions—says that China has 300 million new migrant workers. When including their parents and children, the number reaches 500 million. Their impact on Chinese society must not be overlooked. In other words, the condition of these 500 million people affects China’s social stability.

If a factory lays off 10 percent of its workers, people may think that the workers are probably not the right fit for the position. If 50 percent of companies downsize, it can be attributed to a market downturn. But if capital leaves, as is the case today, and hundreds of millions of people become unemployed, then this is the beginning of a great depression. In that situation, unemployment is not just a problem for the unemployed workers, but also a social problem the government must face.

China’s economy is now nearing that point. China currently has no advantage in technology, resources, or human capital for a quick recovery. Therefore, China needs to prepare for the pain of long-term unemployment.

Too many people being unemployed leads to the emergence of a group of disenfranchised, internal refugees. The Chinese Communist Party should not forget that the social basis of China’s communist revolution in the 20th century was also a huge number of such people.

This is a translation of He Qinglian’s Chinese article posted on her personal blog on Dec. 29, 2015. He Qinglian is a prominent Chinese author and economist. Currently based in the United States, she authored “China’s Pitfalls,” which concerns corruption in China’s economic reforms of the 1990s, and “The Fog of Censorship: Media Control in China,” which addresses the manipulation and restriction of the press. She regularly writes on contemporary Chinese social and economic issues.