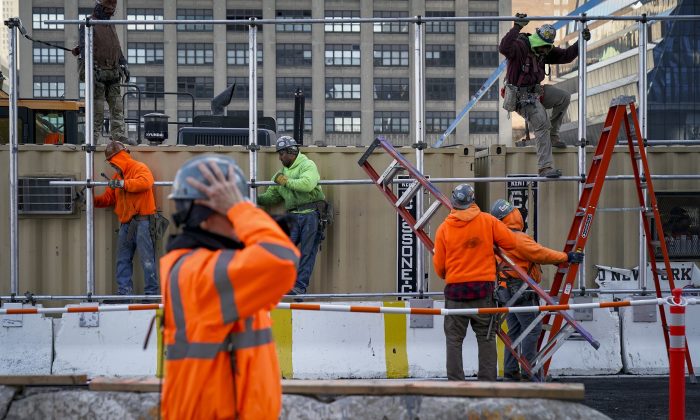 Workers work at the Hudson Yards development site on the West Side of Midtown Manhattan on March 12, 2019. (Drew Angerer/Getty Images)
Economy

Americans are increasingly foregoing unemployment benefits as the job market remains strong and the economy shows signs of acceleration.

The initial claims of jobless benefits dropped to 192,000 in the week ending April 13, down 5,000 from the week before (pdf). That means less than 59 out of 100,000 Americans applied for the benefits—a record low. Economists had forecast claims would rise to 205,000 in the latest week.

Meanwhile, retail sales in March increased by 1.6 percent—the most in 18 months—as households boosted purchases of motor vehicles and a range of other goods, the latest indication that economic growth picked up in the first quarter.

Fears of an abrupt slowdown in activity escalated at the turn of the year after a batch of weak economic reports. But those concerns have dissipated in recent weeks amid fairly upbeat data on trade, inventories, and construction spending that have suggested growth last quarter could actually be better than the moderate pace logged in the final three months of 2018.

Economists polled by Reuters had forecast retail sales would accelerate 0.9 percent in March. Retail sales in March advanced 3.6 percent from a year ago.

The unemployment rate stood at 3.8 percent in March. It may have room to fall even further without leading to excessive inflation, Federal Reserve Vice Chairman Richard Clarida said on April 9 in comments that could further solidify the central bank’s hesitancy to raise rates further.

Some economists, along with the Trump administration, have long predicted there are more workers available in the economy, given the historically low percentage of Americans in the labor force, which only includes those employed and those who sought a job in past four weeks. Part of the reason is the aging population, but part of it is also that a large number of people of productive age are too dejected to seek jobs. Trump, always a cheerleader for American economic potential, has made it part of his mission to bring these people back from the sidelines.

The results so far have been encouraging—70 percent of new hires in 2018 came from outside the labor force, Labor Secretary Alex Acosta said March 4.

For 13 months in a row, the unemployment rate has been at or below 4%. @POTUS pic.twitter.com/GmCLgyCyQz

The Fed was surprised by this news, Clarida said in prepared remarks for a Minneapolis Federal Reserve bank conference on monetary policy and income inequality.

The low unemployment rate “has been interpreted by many…as suggesting that the labor market is currently operating beyond full employment,” he said.

Now, it appears, the central bank is catching up.

Clarida is overseeing a broad review of the Fed’s system for setting monetary policy, and said that better understanding the nature of full employment would take an equal priority alongside assessing how to better achieve its 2 percent inflation goal.

He noted that recent job gains also have helped narrow the gap in unemployment rates between whites and racial and ethnic minorities, and have helped lower-income groups make up ground economically.

“Wage increases in the past couple of years have been strongest for less-educated workers and for those at the lower end of the wage distribution,” Clarida noted.