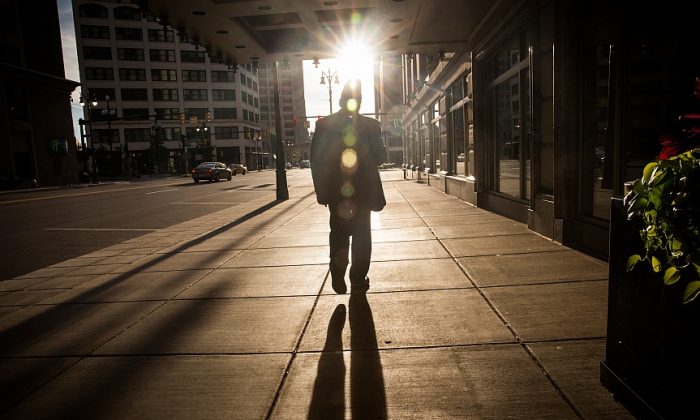 A man walks the Detroit streets in this September 6, 2013 photo. Detroit has over 78,000 abandoned homes across 140 square miles, and suffers from 16 percent unemployment. (Andrew Burton/Getty Images)
US

While many Americans have lost jobs because of outsourcing and the economic situation, America’s Emergency Unemployment Compensation (EUC) program is expiring at the end of December.

Banks, which are considered responsible for the financial meltdown, were bailed out. But the American public, especially those who lost jobs, are facing one stumbling block after another.

Congress authorized EUC in 2008. The program provides critical support for workers that have exhausted their regular employment benefits during times of high unemployment.

No Votes for Longer Unemployment Help

Congress doesn’t seem to be in any hurry to extend the program. There are no roll call votes for two bills on record. Two legislative measures are under consideration, H.R. 3546 and S. 1747, that would extend EUC until Jan. 1, 2015, among other issues. There hasn’t been much action on either bill. Democrats support and Republicans oppose both legislations.

Unless legislation passes Congress, “Those currently receiving EUC would be immediately cut off,” according to a report by the Council of Economic Advisers (CEA) and the U.S. Department of Labor.

Since the inception of EUC after the Great Recession began, close to 69 million people escaped poverty. It was crucial, according to a December report from The Council of Economic Advisers and the Department of Labor.

There are many more unemployed than the end of November official unemployment rate counts. The official rate ignores people that are no longer looking for jobs or work part time. If one included all the unemployed, the rate would be 13.2 percent.

“Failing to extend UI benefits would put a dent in jobseekers’ incomes, reducing demand and costing 240,000 jobs in 2014,” said the report.

According to labor experts, extending EUC is crucial for the economy and the affected workers. Not only would people lose income, it would affect the Gross Domestic Product (GDP). GDP is the market value of all goods and services produced during a given time.

“Estimates from the Congressional Budget Office and JP Morgan suggest that without an extension of EUC GDP will be 0.2 to .04 percentage points lower,” said the CEA and Department of Labor.

According to the National Employment Law Project (NELP) the extended unemployment insurance is needed, because the market does not churn out enough positions when compared to the unemployment situation.

Monthly job openings increased by 67 percent between 2009 and August 2013.

Opponents claim that extending EUC would put more people in the unemployment lines and increase the national debt. They call the program just another welfare benefit.

Rep. Tom Cole (R-Okla.) said Republicans are against extending the extended unemployment benefits, according to the Huffington Post. “I can’t justify adding $25 billion more to the deficit,” Senate Minority Whip John Cornyn, (R-Texas), told the National Journal. He said he could consider extending the insurance if it was paid for.

“For the past 25 years, fewer than half of unemployed workers have actually received unemployment insurance, except during recessions,” stated a 2013 article published by the Center on Budget and Policy Priorities.

People that resigned and those looking for their first job are not eligible.

The funds for the program are drawn from taxes paid by an employer. Economists reason that in the end the employer will not pay the tax out of company’s coffers. In short, the employee’s salary is lowered by the amount of the tax paid by the employer, according to the Center on Budget and Policy Priorities.

Who pays for the funds or who receives the funds is unimportant. What counts is that the unemployed person gets a lifeline.