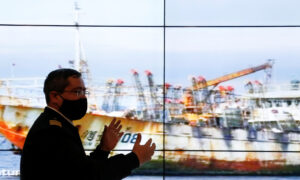 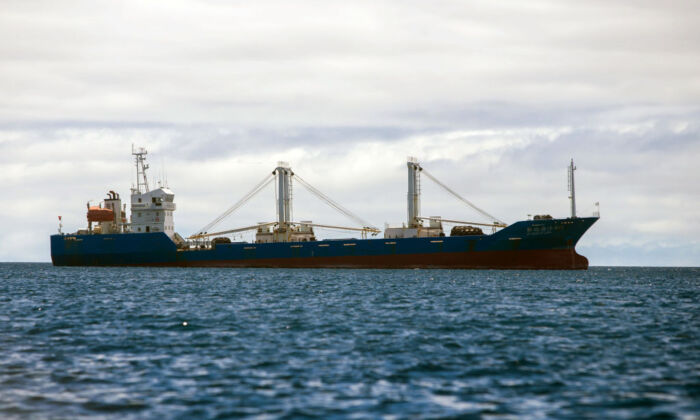 A Chinese-flagged ship is seized in the Galapagos Marine Reserve for carrying some 300 tons of fish, including several endangered species such as the hammerhead shark, on Aug. 25, 2017. (Juan Cevallos/AFP via Getty Images)
International Relations

A recent report documented up to 6,000 foreign fishing vessels that disabled their public tracking devices for more than 24 hours along the border of Argentina’s national waters, sounding the alarm that they could be illegally fishing in the country’s exclusive economic zone (EEZ).

“The Chinese fleet was responsible for 66 percent of these incidents,” said the June report by Oceana, a Washington-based non-profit organization dedicated to protecting and restoring the global oceans. The report claims that hundreds of Chinese fishing vessels mainly target shortfin squid, which is vital to both Argentina’s economy and ecosystem.

The analysis concludes that from January 2018 to April this year, undetected fishing activities took up more than 600,000 total hours, and many vessels turned off their Automatic Identification System (AIS) within one mile of Argentina’s EEZ.

The AIS from Global Fishing Watch, an online technology platform launched in 2016 by Oceana, SkyTruth, and Google, monitors and records data of the vessel’s name, flag state, and location.

“To me, it is particularly concerning and suspicious when fishing vessels have these gaps in tracking data so close to the edge of another country’s EEZ,” Marla Valentine, Oceana’s illegal fishing and transparency campaign manager, told The Epoch Times in an email.

“When vessels disable their AIS devices it can hide activities such as fishing, transshipment, and vessel locations from public view and could mask potentially illegal behavior, such as crossing into Argentina’s EEZ to fish,” she wrote.

These foreign fleets mainly fish for Illex argentinus, commonly known as the Argentine shortfin squid. The economically important species is found along the Argentinean coast, Uruguay, and Brazil, contributing an average of $597 million and sometimes up to $2.4 billion per year for South America’s economy.

Shortfin squid is also the food for fish such as tuna and swordfish. The report warns that losses of these populations can result in ecological devastation.

The report also found that more than 800 foreign vessels have engaged in about 900,000 hours of reported fishing, 69 percent of which were taken up by over 400 Chinese vessels. Others came from Taiwan, Korea, and Spain.

In contrast, Argentina’s local fishing vessels conducted less than one percent of the fishing operations in the same waters.

“Our oceans need protection, not reckless fishing from China and other distant water fleets,” Valentine said in a June 2 press release.

She suggests governments to better control the imported seafood to ensure product safety and legality.

“Being able to trace the path of a fish from the boat it was caught on [and] to the time it lands on a consumer’s plate is key to reducing the chance of products of IUU [Illegal, Unreported, and Unregulated] fishing being imported,” she said.

China’s fisheries authorities set penalties for illegal and abusive fishing in 2020, yet experts say it is unclear how these measures are being enforced, VOA reported.