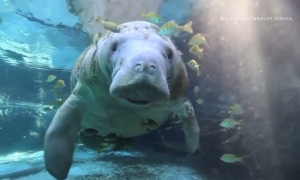 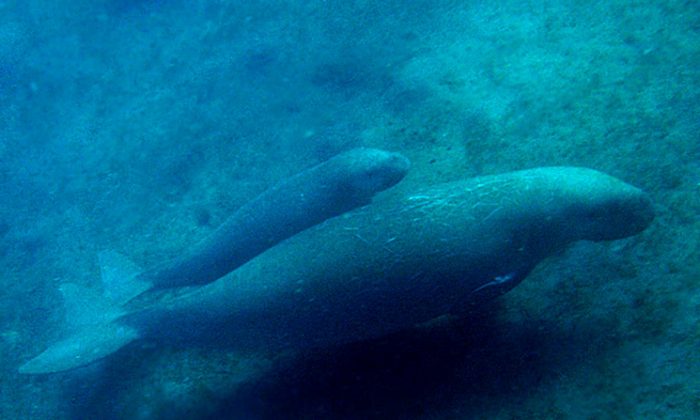 A manatee mother and calf swimming together (commons.wikimedia.org)
Science News

There is a new baby animal charming visitors at France’s Beauval Zoo—though she is not particularly cute or cuddly.

However, she is a survivor.

Kali’na is a manatee, also called a sea cow—a relative of elephants, which look sort of like walruses. Manatees in the wild live in rivers in warm climates: West Africa, the Amazon, the West Indies, and Florida, where there is a Manatee County and a Manatee River.

Kali’na weighed about 33 pounds when she was born in late October. Generally, manatee calves weigh 50-60 pounds at birth.

Kali’na was one of a pair of twins; her sister was even smaller, and unfortunately much weaker.

Like other marine mammals, manatees live underwater but breathe air. Manatees give birth underwater, after which the mother helps guide the infant to the surface for its first breaths, but the calves must swim on their own very quickly.

Kali’na was able, but her sister didn’t make it.

Twin births are rare for manatees. Considering how much care the newborns need in that first hour, it is easy to see why.

Despite her rough start, Kali’na is growing nicely, tipping the scales at 55 pounds, thanks to her mother Lolita and plentiful marine vegetation.

An adult manatee can grow to be 10 feet long and weigh between 900 and 1,200 pounds. These herbivorous giants swim very slowly—3 mph, as a rule, though they can briefly sprint at three times that speed. Sea cows, like terrestrial bovines, basically ambling around grazing all day.

Manatees do not have any natural predators, so they are not fearful; in fact, they tend to be curious, on occasion making their way up to swimmers and boaters to investigate the land-based visitors.

The biggest threat facing these aquatic giants are boats and ships. Many manatees are covered with scars from encounters with propellers; the big beasts, floating just below the surface, are impossible for boaters to see and they are too slow to escape the peril.

Stricter enforcement of manatee-zone speed limits and campaigns to increase public awareness have had some success over the past 25 years, and manatees have started to increase their numbers.

The U.S. Fish and Wildlife Service reclassified manatees as “threatened” from the stronger “endangered” designation in 2017.