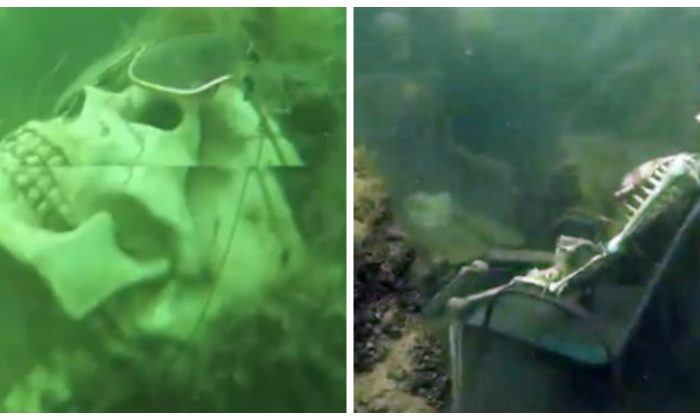 A man snorkeling in the Colorado River found two skeletons sitting in lawn chairs about 40 feet underwater, and quickly alerted the authorities.

The La Paz County Sheriff’s Office and Buckskin Fire Department respond to report of “found human remains” in the Colorado River On May 4, 2015, at approximately 10:00 hours, the La Paz County Sheriff’s Office was dispatched to the area of Cienega Springs boat launch in regards to a report of found human remains. The reporting person stated that he/she was out snorkeling when they noticed skeletal remains at the bottom of the river. Sheriff’s Office personnel met with members of the Buckskin Fire Department who sent one of their divers down to investigate. The diver took an underwater camera and video recorded the footage as he saw it. When Firefighter Foerstner located the alleged remains, he found it to be an underwater tea-party with two fake skeletons sitting in lawn chairs. See video-footage. Although the call itself was resource intensive, both the Sheriff’s Office and Buckskin Fire were happy to find that the remains weren’t real and thanked the reporting party for making the call.

Posted by La Paz County Sheriff’s Department on Monday, May 4, 2015

The “skeletal remains” were at the bottom of the river, near the Arizona and California border. The snorkeler has remained anonymous.

La Paz County Sheriff officials and a diver from the Buckskin Fire Department launched a hunt for the bodies, but they discovered an interesting case.

The skeletons were in fact fake, and looked to be arranged as if sitting together in a sort of underwater tea party.

The skeletons are wearing sunglasses, and one is holding a sign that includes the words “Bernie” and “dream in the river,” although the entire sign is not legible. The sign also has the date of Aug. 16, 2014, which is possibly when the skeletons were placed there.

The sign could be a reference to the movie “Weekend at Bernie’s,” in which the two main characters lug around their dead boss for days, losing and recovering his body several times, Bagby said. At one point in the film, Bernie’s corpse falls off a boat and into water.

The sheriff’s office won’t launch an investigation into who left the skeletons there, Bagby said.

We go all the time to false alarms. That’s just a first-responder’s life.
— Lt. Curtis Bagby

“Things happen. We go all the time to false alarms. That’s just a first-responder’s life. We’re trying not to be overly concerned about it, not make too big a deal out of it,” Bagby said.

“We like to show some things that are fun, some levity too. But in the meantime, don’t think it’s OK to go put something there,” he said.