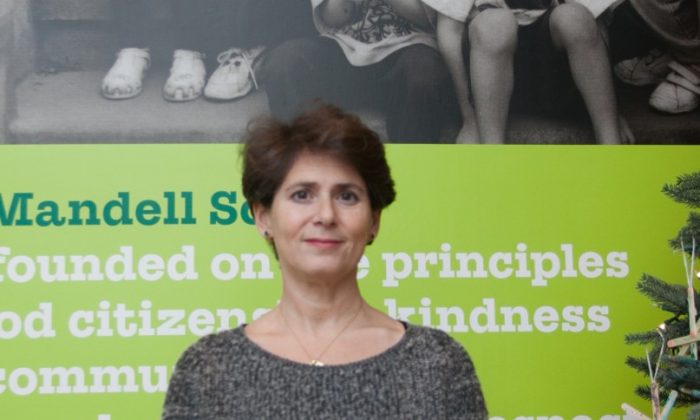 A student works on creating her toy car in a woodworking class. (Benjamin Chasteen/The Epoch Times)
US

NEW YORK—Hands-on instruction with a variety of components for enhancing learning—a hydroponic garden, a mini “zoo,” and a state of the art theater—is the core of The Mandell School on the Upper West Side.

The private school was founded by Max Mandell in 1939 as a play group for children in the area. He took them on learning excursions around the city, dropping in on places such as Coney Island, Bear Mountain, and Jones Beach.

“His belief was that if you took children and created a safe, stimulating environment for them, and gave them experiences that broadened their horizons, anything was possible,” said Gabriella Rowe, Mandell’s granddaughter.

Rowe, despite misgivings earlier in her life, runs the school now.

Previously a banker, she learned two profound life lessons: One is that there are people who work at jobs they don’t love; the other is how to be passionate.

“I actually loved banking,” she said. “I got to go down in coal mines and go on oil rigs and learn how companies work.”

For Rowe, being passionate includes caring about and investing in what one is doing.

“That is so much of what we teach children,” she said. “We teach them [that] whatever it is you choose to do in life, you’re not only going to do it well, you’re going to do it with everything that you have to give.”

The students appeared engaged with their work during a recent tour. Some sawed wood for making toy cars in a classroom; others gathered around guinea pigs in the lab (known as the “zoo”); and in the theater, a class watched the Lorax film after recently finishing their own Lorax performance.

All of these scenes show the core of The Mandell School.

The emphasis is on experience and making sure that every single student—not just the top of the class—understands what is going on, to the point of being able to clearly explain it.

“Swirk, swirk, swirk.” Students sawed wood that was clamped to tables. Several came over in turn and explained what they were doing and the concept behind their work.

Rowe’s youngest son, Griffin, who was making a monster truck, said he and his classmates were making the wood into car bodies, to which the wheels and a string would be attached, so they could pull them along.

His classmate Phoebe Chaplin held up a piece of wood that resembled a cyclops without the arms and said she was making an “eye clops.”

The inspiration came from her mom borrowing her dress makeup the night before they started the project. “Why don’t you do something about eyes?” her mom had said. “And I said, ‘That’s a great idea!'” recalled Phoebe. Her classmate Edward suggested the name.

“One of the things we want children to do is really go deep on a particular subject,” said Rowe, as the kids went back to sawing. “As you’re using material and as you’re trying communicate something, you have to have an idea behind it.”

The high level of amenities at the school is evident. They include a cafeteria with a living plant wall (cuttings go up to the hydroponic garden); a second-floor terrace with a duck pond, chickens (producing fresh eggs), and a vegetable garden; and connections with parents (an executive producer for HBO brought a film production class into his studio).

The students enjoy these things. When the teacher told the class gathered around the guinea pigs they had to leave, the students let out a collective sound of disappointment. Nearby an iguana eyed some crushed melon and cucumber. “The children actually made it in the cafeteria with the person who runs our food service,” explained Rowe.

The goal is “touch it, feel it, take care of it, be with it,” said Rowe, explaining that taking care, loving, and becoming attached to animals teaches children responsibility and respect.

The level of flexibility in Mandell even trumps charter schools, says Ben Champ, head of the elementary school. Teachers often come from other schools and say, “I’ve finally got some independence,” he said.

There’s also flexibility when it comes to making sure some students don’t get left behind. Two kids on the hallway floor listened to a teacher explain parts of geometry they hadn’t understood.