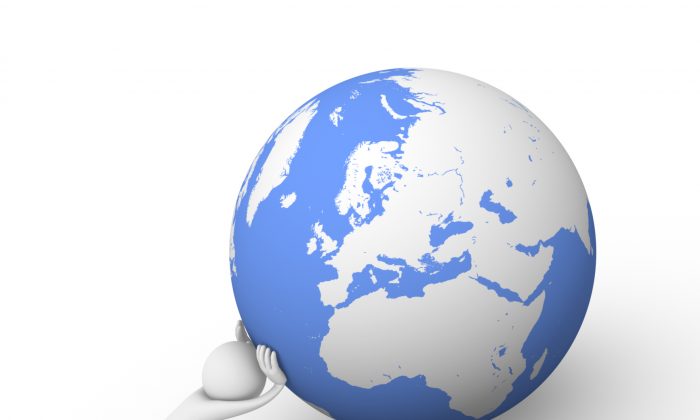 Understanding Transitions May Be Critical to Our Survival

Next time you have a bad day at work, consider Sisyphus. His annual appraisal by the ancient Greek gods was so bad (over the previous 12 months he demonstrated deceitfulness, greed, malice, and homicide) that he was reassigned to rolling a massive boulder up a steep hill only to find that when he neared the top, the boulder would somehow always slip through his grasp and return back to the bottom. This was a job not just for life, but for eternity.

If Sisyphus had somehow been able to crest the hill, then at least he would have been able to demonstrate the important mathematical concept of critical transitions, abrupt and often momentous changes.

Sisyphus’s efforts attempt to drive the boulder away from this attractor. If he releases the boulder, it relaxes back to this attractor in ways similar to the relaxation of a rubber band back to its resting state after you stretch it. Pinging a rubber band across the office shows that relaxation can be very sudden with respect to the force that moved it away from the attractor in the first place.

If Sisyphus had been able to roll the boulder to near the top of the hill he would have found that the going gets easier, as the top is where the slope decreases until it becomes flat at the crest. At this point, a small nudge would be sufficient to set the boulder moving down the other side of the hill and come to rest within a different attractor.

Getting back to the previous attractor could require just as much effort as moving it in the first place. Not that I imagine Sisyphus would be in hurry to return. But given time his attitude would change. And time was something that Sisyphus had in abundance.

Alas, we may have precious little time to avert critical transitions such as the possible collapse of ice sheets, dieback of the Amazon rainforest, and thawing of Tundra permafrost. It would be effectively impossible for us to reverse these transitions once they tip over into new states—states that may prove to be well outside of any safe operating space for humanity.

Unfortunately, for some of them we may have passed the point of no return some time ago. The collapse of significant portions of the Western Antarctic ice sheet now appears inevitable. While its complete destruction may take centuries this is much faster than the rate at which it was created. Many generations put their shoulder to that particular boulder and drove it beyond its tipping point. They did so largely ignorant of the consequences of their actions, which will include many meters of sea level rise.

Being able to warn of impending critical transitions is something we would very much like to do. While there are some promising techniques that analyze how the system changes over time such as looking for wobbles as it approaches a crest between two attractors (critical slowing down), or small but rapid changes as the system moves back and forth between the attractors (flickering), we are a long way from being able to provide any alert in real time.

In the meantime perhaps we should consider much simpler but more robust approaches to managing our interactions and impact. Precautionary principles should be paramount, in conjunction with the observation that it’s much easier to break complex systems than fix them.

More generally, unlike Sisyphus, we can stop for a moment to consider just what are we struggling against and to what end. The seemingly never-ending quest for more development, products, services—more stuff—will further ratchet up and stress already brittle systems. Producing a critical transition to a more sustainable civilization will require redirecting our efforts.

Renewable energy and closed loop recycling, in the context of new economic thinking that puts planetary resources and justice at its center, show us the way out of the landscape we have traveled, and in part created.

Such transformation won’t happen overnight and we may not be the ones to crest the hill. But as a result of our efforts right now, future generations may one day see the sun rise on a very different world.

James Dyke is a lecturer in Complex Systems Simulation at University of Southampton in the U.K. This article previously published in TheConversation.com.