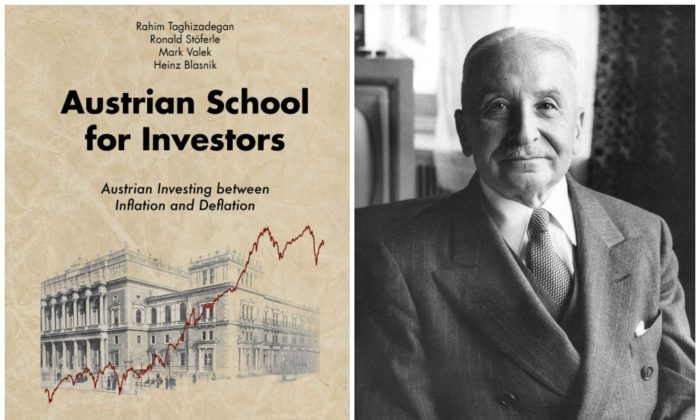 The cover of "Austrian School for Investors" on the left and one of its biggest scholars, Ludwig von Mises, on the right. (Mises.at)
Business & Markets

Understanding the Real Model for Capitalism

Capitalism for most people means people and corporations make the most money they can and accumulate as much wealth as they can.

This is wrong, at least according to the Austrian school of economics taught and practiced at the beginning of the last century by Carl Menger and Ludwig von Mises in Vienna, Austria—hence, the name. And that idea of capitalism was even mainstream up until the 1950s.

This doesn’t mean the ideas propagated in the school aren’t valuable. It teaches a system of capitalism far more in tune with the resources the earth provides and with the human spirit than, for example, the pure profit motive of the neoclassical school.

Because the ideas also help investors navigate the treacherous waters of today’s financial markets—many followers predicted the financial crisis of 2008, a few modern Austrians got together and penned “Austrian School for Investors.”

It’s a comprehensive explanation of the real capitalism of the Austrian school as well as its time-tested investment principles using many original quotes and themes of the great thinkers of the school, such as Ludwig von Mises, Friedrich Hayek, and Carl Menger.

The verdict on the current state of affairs isn’t pretty.

Many people have a feeling that there is something wrong with the current economic setup and that the American Dream of days’ past isn’t working anymore. The reason according to the Austrian school—a warped incentive system.

“Markets, prices, and interest rates are instruments that serve to coordinate the actions of countless different human individuals. If these institutions of the division of labor are distorted, coordination is impeded,” the book states.

Here the authors mostly mean our debt-based money system, where the central bank sets the most important price of the economy, the rate of interest.

The Most Important Price

The interest rate describes the trade-off between the savers who forgo consumption today to give their money to entrepreneurs who then use the money to create capital, which benefits society.

If the interest rate is determined by the market rather than a central authority, savers will save enough to give entrepreneurs the means to produce what society needs.

If the interest rate is too low, as it is now, consumption morphs into consumerism and entrepreneurs produce things that society doesn’t need.

The decisive point is the combination of government and private initiative: the government shows the way, enforces its wishes against all opposition.
—  Austrian School for Investors

The market is better at setting rates and prices than the government because the market reflects a myriad of individual decisions each containing unique information the central authority could not possibly have access to.

Today central banks claim to have all the information to make good decisions about interest rates, but the Austrian school takes a more pragmatic approach.

“F. A. Hayek, in particular, was critical of the pretense of knowledge, the error to believe that one can immediately explain everything rationally and remove all inconsistencies from the world,” the book states. “These inconsistencies are of special importance: for the scientist, the philosopher, the entrepreneur, and the investor.”

The same is true of government interference in the marketplace as well, which leads to corruption because of centralized power, which we see now in the favorable treatment of corporations and banks.

“The decisive point is the combination of government and private initiative: the government shows the way, enforces its wishes against all opposition, covers the required cascade of debt and spurs it on, while banks and entrepreneurs are making profits—which are the greater the closer they are to the government,” the book states. “This boost to economic activity of course eventually trickles down bit by bit through the entire population, but it produces massive distortions.”

Service Rather Than Greed

Oh yes, the greedy entrepreneurs and investors, what does the Austrian school have to say about them?

The basic message is that neither investment nor business is about greed. It’s about providing value to others through honest means.

“A company produces profits if it closes a gap in the structure of the economy, which exists due to the mistakes made by other actors,” the book states. “The value added is not at the expense of other factors such as labor, but a signal that certain factors have not received their full valuation by the marketplace.” In other words, the company succeeds by providing a better allocation of resources, benefiting society as a whole.

The same is true of investing, which is not restricted to buying stocks or bonds, but rather building something through activity:

“Investment is always an entrepreneurial activity. It consists of taking uncertain risks with the aim of future value creation for the benefit of other people. From the Austrian School’s subjectivist perspective, four preconditions need to be fulfilled so that a good or a service represents value to other people which they are prepared to pay for:

Greater value can also be created by:

This is different from many products offered today, which mostly do not fulfill the above criteria and are based on marketing only.

“[The distortion in time-preference] is then supposed—as Joseph Schumpeter disparagingly wrote—to be compensated for by psychological advertising techniques, this is to say manipulated selling pressure, and political slogans. Advertising and politics ever more blatantly demand more consumption.”

Consumption is mostly financed by debt and not productive activity. Again low-interest rates funding the debt play an important role.

“The acquisition of wealth is an active process. It describes our potential as free human beings to attain the goals we set out to achieve,” the book states. “Thus, Mises always writes of human goals which economic activity serves, never about cravings, ‘growth’ or the gross domestic product.”

None of the Austrian scholars advocated acquiring more wealth than necessary to achieve one’s goals, vastly different from the profit-maximizing assumption of the neoclassical school.

Ludwig von Mises wrote, “Production is not something physical, natural, and external; it is a spiritual and intellectual phenomenon. Its essential requisites are not human labor and external natural forces and things, but the decision of the mind to use these factors as means for the attainment of ends. What produces the product is not toil and trouble in themselves, but the fact that the toilers are guided by reason.”

“The Austrian School for Investors” contributes to the philosophical debate about how a real capitalist system should be run and probably answers a lot of questions critics of the modern bastardization of capitalism have.

But it doesn’t stop there. It also has an informative section about money and gold and some time-tested principles for saving and investment, as well as a little bit of speculation.

If you haven’t heard of the Austrian school or haven’t studied it properly “Austrian School for Investors” provides an easy yet comprehensive introduction to this timeless school of thought that has many practical benefits.