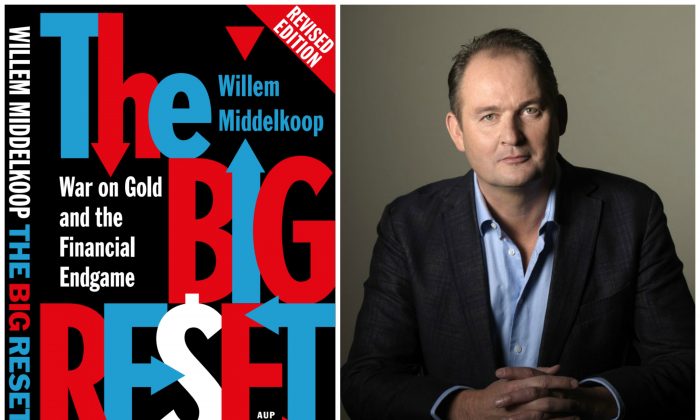 It was in the late 1990s when Willem Middelkoop finally figured it out. He came home from work one day and told his girlfriend: “I understand the financial system.”

This may seem ironic because Willem is not a banker, financier, or an economist. Or maybe not, because most mainstream economists and bankers have a horrible track record at predicting market movements or major shifts in the financial system.

Middelkoop was a photojournalist when he became curious about why he could buy eight properties in Amsterdam with no money down and rent them out straight away for an almost risk-free profit. So he began to ask questions.

It is my belief that, well before 2020, the global financial system will need to be rebooted to a new paradigm in which gold will play a larger role.
— Willem Middelkoop

He found the answers, which helped him understand the financial system—it also led to over 5,000 appearances on Dutch TV and the successful launch of a gold trading company and investment fund.

What Middelkoop learned is presented in “The Big Reset,” originally published in 2013 and updated in 2016 by Amsterdam University Press. Over 100 questions and answers grouped into six chapters, take the reader from the origin of money through the nitty gritty of the banking system, to the history of the U.S. dollar as the world reserve currency, and on to debt, gold, and finally the big monetary reset of our times—the financial crisis of 2008, which Middelkoop predicted back in 2007 on Dutch TV.

Middelkoop is now making his next big prediction.

“It is my belief that, well before 2020, the global financial system will need to be rebooted to a new paradigm in which gold will play a larger role,” he writes.

But first, let’s travel back in time with Middelkoop, who wanted to understand a credit system out of control. If you want to understand banking and credit, you first have to understand the history of money and gold.

The lack of training in formal economics works in Middelkoop’s favor here, as he is not clouded by any initial bias. He just wanted to learn the truth about finance and is now sharing his—sometimes critical and out of the mainstream—insights with readers.

This is quite smart, because it is not the bankers themselves but their shareholders that will have to pay these bills.
— Willem Middelkoop

Do you know why gold became the predominant medium of exchange and why it was later replaced by fiat money? How does a gold standard work and what is fractional reserve banking? What is the history of central banking and why are central bankers “lap dogs for private bankers instead of watch dogs,” as Middelkoop puts it.

Like many other researchers who don’t have the academic blinders of economists, Middelkoop criticizes the Federal Reserve (Fed) for its quantitative easing programs and criticizes commercial banks for their addiction to credit, misallocation of capital, and corruption. An appendix lists all fines paid by U.S. banks from 2000 to 2014. The total is $135 billion.

“This is quite smart, because it is not the bankers themselves but their shareholders that will have to pay these bills,” he writes.

This critique leads to further discussions of the leading role of the United States in the world financial system, and why Middelkoop feels the days of the dollar as a reserve currency are numbered.

He doesn’t leave out the relevant history of the Bretton Woods financial system and the closing of the gold window of 1971. Middelkoop also explains the price manipulation , confiscation, and nefarious trading of physical gold of Western governments, central banks, and commercial banks.

He also delves into why the Chinese have accumulated so much gold and what the end game of their geopolitical initiatives is:

In my humble opinion, China owns all the keys now and they will do what is in their best interest to reach their long term goals. They will continue to play chess on all boards and to support both Russia (big neighbor and needed for commodities) and the United States (worldwide partner for geopolitical and economic reasons). The Chinese leadership understands they need at least another 10 to 20 years to improve their own financial and military structures before they can be in a position to compete with the United States for worldwide leadership.

In the second half of the book, Middelkoop zeros in on the world’s debt load, which cannot ever be repaid in real terms, which is why he warns us away from creative solutions.

“We could even write off all mortgages and nationalize all real estate, and have a system whereby we pay rent to the state. These kind of scenarios are hard to comprehend, but when the need is highest, solutions can become very creative.” It could be the end of private real estate ownership.

A better one would be the ancient debt jubilee where all debts would just be written off every 15 years or so and the system reset, which may be preferable for the majority.

A more likely reset scenario is the global powers including China working together to use either gold or the International Monetary Fund’s (IMF) special currency unit’s Special Drawing Rights (SDR) to create a new financial system. As usual, there is a significant chance that things won’t work out as planned.

“A breakdown in trust between the most important economic powers could result in a worst-case scenario of escalating trade-, financial- and even real wars, which could include gold confiscations. … There is a risk that a new crisis will occur before a planned reset could be unrolled and chaos will take over.”

Until this crisis occurs, you still have time to read Middelkoop’s book to understand the financial system and its history, and prepare for the Big Reset.