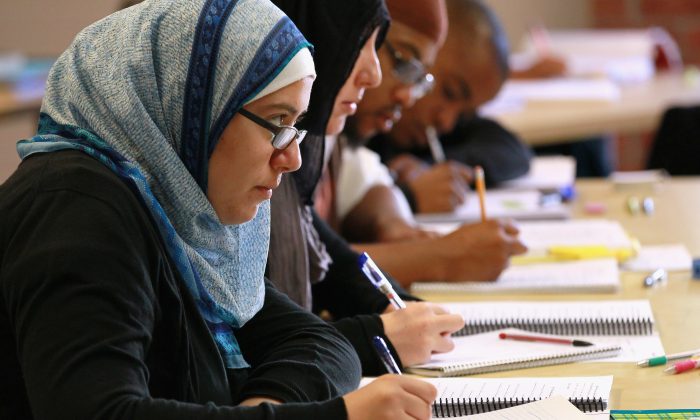 Leenah Safi (L) looks on during a lecture at Zaytuna College in Berkeley, Calif., on Aug. 30, 2010. (Justin Sullivan/Getty Images)
News

All who adhere to the great religions of the world understand that faith, hope, and charity are sacrosanct.

Human beings experience these virtues throughout their lifetimes as well as pain, trials, and anguish.

For those who believe, faith allows individuals, families, society, and the international community to blossom despite life’s challenges.

Faith gives people answers to the meaning of life. It provides a guide to conscience and our actions, demanding that respect, goodness, and tolerance are expressed for every member of the human family.

The true hallmark of any person who proclaims a life of faith is manifested through honoring the dignity of every human person.

Moral Code: The Heart of Humanity

In the life of faith, a moral code is exemplified by the golden rule, “Do unto others as you would have them do unto you.”

This moral foundation is essential for not only believers but for every human person. It urges respect for humanity and especially compassion for all wounded by the trials of life.

A Call for Dialogue

There are destructive tensions throughout the world. Dialogue must remain an antidote to the venom of war, conflict, violence, ignorance, and misunderstandings.

For those who represent the great faiths of the world, especially Christians, Muslims, and Jews, dialogue is expressed through respect, dignity, and charity. Dialogue has the power to build harmony for faith-based communities—as well as for nonbelievers—fostering social justice, moral values, freedom and liberty.

America is a land filled with churches, mosques, synagogues, and temples with the responsibility to intensify dialogue through faith-based communities. Our bill of rights proclaims that freedom of religion is sacrosanct. Therefore, we have the moral foundation to cultivate human rights, religious freedom, and peaceful coexistence.

Our nation must be the catalyst for resolving misunderstandings between nations and faiths that include intolerance, racism, injustices, ignorance, wars, and violence.

Law enforcement and communities throughout the United States have recently experienced controversies crystallizing the importance of community policing.

The community policing philosophy is misunderstood if only perceived as a crime prevention mechanism. It also has the capacity and responsibility to build cohesiveness not only with race relations but also with all faith-based communities.

During my community policing initiatives over the last 20 years, I have experienced outstanding dynamics between law enforcement and faith-based communities. These were witnessed not only through invocations and benedictions at law enforcement events by leaders from every faith but also through ironclad partnerships.

One example that comes to mind is an event coordinated by the North Jersey Regional Crime Prevention Officers Association and hosted by Fairleigh Dickinson University.

It featured Sohail Mohammed, a dedicated Muslim and respected attorney who delivered an insightful presentation to law enforcement and community leaders titled “Understanding Islam and the Muslims.”

Sohail Mohammed demonstrated how the Muslim communities throughout New Jersey forged strong ties to police, the FBI, government officials, and religious leaders from other faiths. I attended another event, as a guest of the FBI that exemplified this collaboration.

Sohail’s presentation included practical demonstrations of Muslim customs-enhanced law enforcement/community bridges by understanding the pillars of Islam. These pillars—faith, prayer, charity, fasting, and pilgrimage—complement the teachings of every faith-based community. The speaker enlightened attendees with information on the Prophet Muhammad, the Holy Quran, sayings of the prophet, and Ramadan.

Forged partnerships with the entire community, based on America’s sacred principle of freedom of religion, is the strength of our country and hope for the future.

The ideals of community policing are critical to reawakening the nation by igniting dialogue, enhancing respect, and cultivating partnerships with law enforcement agencies and communities throughout America.