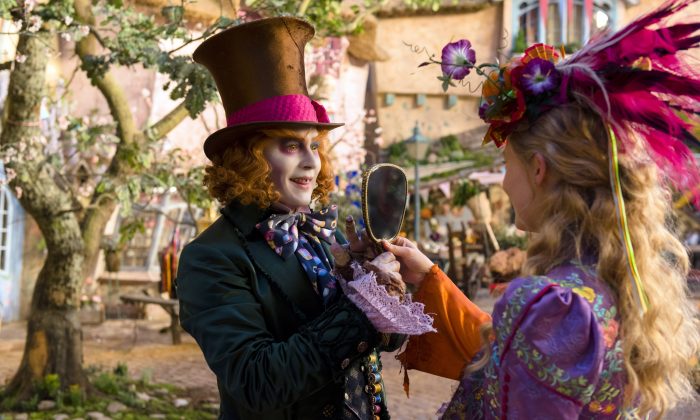 This image released by Disney shows Johnny Depp as the Mad Hatter (L) and Mia Wasikowska as Alice in a scene from "Alice Through the Looking Glass," premiering in US theaters on May 27. (Peter Mountain/Disney via AP)
Entertainment

NEW YORK—Hollywood’s summer, which kicks off with the fittingly combative “Captain America: Civil War,” will be a season of struggle: for box office, for originality and for opportunity.

More than ever, the big tent of summer moviegoing is held up by a forest of tentpoles stretching from May to August. The swelling size of the summer movie has turned the season into a game of survival. The possibility of bombing lurks as an ever-present threat, testosterone often dominates in front of and (especially) behind the camera, and few non-sequel, non-reboot films dare to compete.

“It’s a different landscape than 2002 when the first ‘Bourne’ movie came out,” says Matt Damon, who returns to the franchise in Paul Greengrass’ “Jason Bourne” (July 29). “It’s like a high-stakes poker game that I don’t want to be in. The swings are just so brutal. Ben (Affleck) just opened ‘Batman v Superman’ a few weeks ago. Everyone around him and in his life was nervous about it. You feel less a sense of exultation when they do well and more a sense of relief because the bets are so big now.”

This season is particularly risk-adverse. Out of the 33 films coming from the major studios, only 12 aren’t a sequel, reboot or based on an already popular property, such as a videogame or best-seller. Take comedy and horror out of the equation and you’re left with just a handful of originals. One of them is Jodie Foster’s “Money Monster” (May 13), a thriller about a brash financial news pundit taken hostage on the air, starring George Clooney and Julia Roberts.

Foster’s film is doubly rare. She’s one of only two female filmmakers helming major studio releases this summer. Though equality remains a year-round issue for the movie business, the constricted summer months can reveal Hollywood at its most retrograde.

“It’s interesting to me that the studio system still sees women as a risk,” says Foster, who wonders if women ultimately even want to inherit some of the kinds of films that dominate the summer. “There are movies that are part of the system we may not be that interested in embracing. I think that more women in the film business will look slightly different than it’s looked in the past for men.”

Paul Feig’s “Ghostbusters” reboot (July 15) was met by a backlash from some corners of the Internet that took offense to a new, female-led version starring four of the funniest comedic performers around: Melissa McCarthy, Kristin Wiig, Kate McKinnon and Leslie Jones. With that lineup, Feig relishes heading into “the big guns of summer.”

“To put out a movie like this in the heart of tentpole season when it’s all these big movies out there, I find it very exciting because a lot of these movies are very male driven, even though they have some great female characters in them,” Feig says. “But to have this be about four incredibly funny people who just happen to be women, I think that’s really exciting.”

Recent history is clear: These will be among the summer’s biggest hits. Last summer (the second biggest ever with nearly $4.5 billion in box office), seven of the top 10 movies were remakes, sequels or came from a comic book. Ditto for four of the top five movies so far in 2016.

Andy Samberg and his Lonely Island trio will be among the few to brave the sequel-strewn seas with something fresh: their celebrity flame-out parody “Popstar: Never Stop Never Stopping” (June 3). Does he take any pride in being one of the few to push an original movie into summer?

“Um, yeah, we’ll find out,” says Samberg, laughing. “It’s heavy duty. We were looking at the schedule and we were like: Holy crap. There’s stuff that’s coming out the week before and the week during us and the week after us, and they’re all really big movies. (Producer Judd Apatow) and the studio felt really strongly about summer and that we had something we could put there.”

One of the fathers of the summer movie season, Steven Spielberg, will also be in the mix with “The BFG” (July 1), his Roald Dahl adaptation that reteams the director with Mark Rylance. The recent Oscar-winner plays the titular giant in a motion capture performance.

“The exciting thing about ‘The BFG’ is the combination of Roald Dahl, who’s just a superb storyteller, with Steven and (late screenwriter) Melissa Mathison,” says Rylance. “It took five years to get made because of course initially many studios said: ‘Giants eating kids? I don’t think so!’ That edge of Roald Dahl, that frightening edge, I hope is still in there. There’s a kind of marvelous, frightening aspect to the fantasy as there is in the Tolkien books or the Grimm fairy tales that children can handle.”

Family audiences will be especially sought after by the likes of “The Secret Life of Pets,” ”Ice Age: Collision Course” and “Pete’s Dragon.” One much smaller film, “Life, Animated” (July 8), will hope to sway moviegoers from the blockbusters while simultaneously reminding them of the power of movies.

The documentary, directed by Roger Ross Williams, is about an autistic young man, Owen Suskind, who found language through his love of Disney animated classics.

“It’s rare that you create a film like this that generations can enjoy together,” says Williams. “In the summer this is an alternative where families can go together and see it and hopefully be inspired and uplifted.”

To be uplifted rather than pummeled at summer movie theaters would indeed be almost radical change of pace.