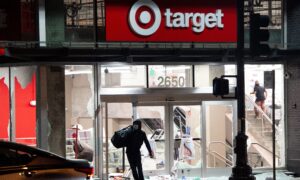 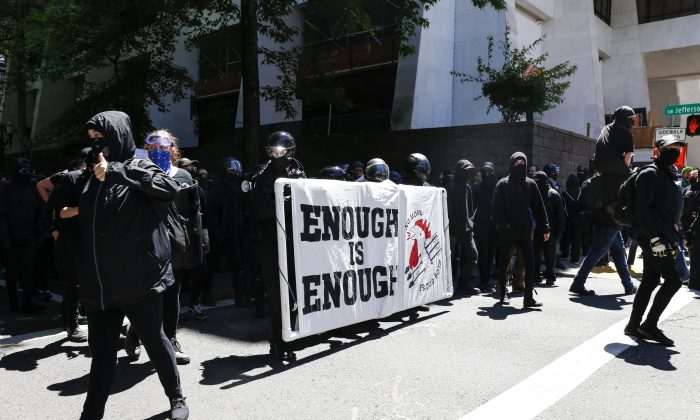 The Rose City Antifa prepare to march in opposition to members of HimToo and Proud Boys in Portland, Ore., on June 29, 2019. (Moriah Ratner/Getty Images)
US News

A series of surreptitiously recorded videos show Antifa members training for combat, including sessions at an anarchist center known as “The Base,” according to a watchdog group.

The videos were recorded by people who infiltrated different groups and shared footage with the watchdog, Project Veritas.

“You’re trying to basically cut off both, both arteries,” a man identified as a fight instructor tells attendees in one video that Project Veritas says is from “The Base.”

Another purported Antifa fight instructor tells attendees that he wants to “reframe the idea self-defense as not simply, you’re being acted upon by an aggressor. But it’s kind of a decision you make to fight back.”

People should think: “I occupy this space and I will not be [expletive] with,” he added.

In another clip, a different instructor shows how to slam people to the ground.

The person who filmed the videos said in a video released by the watchdog group that Antifa’s goals include abolishing the state, shutting down prisons, defunding police departments, and abolishing the U.S. government.

He said he was afraid while filming because if Antifa members had seen what he was doing, “it would definitely have ended in violence.”

In a set of videos released earlier this month that were also said to show New York City Antifa members training at “The Base,” a person identified as an instructor advises people to try to “get a good liver or kidney shot” or break “one of the floating ribs.”

The Base, which couldn’t be reached for comment, describes itself as “an anarchist political center” that’s “committed to the dissemination of revolutionary left and anarchist ideas and organizing.” A set of photographs pinned to the top of the center’s Twitter page shows two police cars burning and anti-police messaging.

Antifa is a far-left network of groups that includes members who openly espouse violence against people they dislike, including reporters, police officers, and conservatives.

Redneck Revolt, described as the militia wing of Antifa, was infiltrated by a woman in 2018 in Shelby, North Carolina, Project Veritas said.

“They are Antifa in that they share the Antifa ideology,” she said in a video released on Tuesday by the group. “This particular group sees themselves as armed revolutionaries. And they believe in total abolition of everything, including the police.”

The footage showed members shooting guns before they interviewed the woman about how she would act if police officers went to her house or if she was accused elsewhere of being part of Antifa.

The woman who captured the footage said she was in fear that some of her recording equipment would be come visible. She said she was kicked out over her support for a candidate for sheriff.

In a statement on its website (pdf), Redneck Revolt says it’s “a national network of community defense projects” and “a pro-worker, anti-racist organization that focuses on working class liberation from the oppressive systems which dominate our lives.”

Redneck Revolt said it believes defensive action is necessary but said members of the network “have no desire to engage with anyone in armed conflict unless they aggressively target our communities.”

An email sent to the address listed by the group bounced back.

The videos came after a Project Veritas operative appeared to infiltrate Rose City Antifa in Portland, Oregon, one of the most prominent Antifa cells in the country.