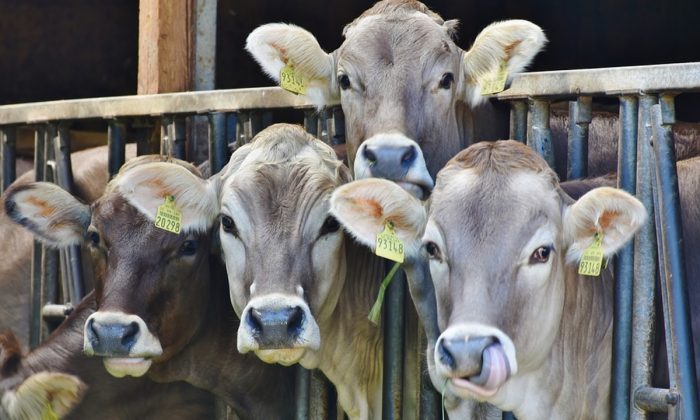 An undercover video investigating animal abuse in one of the largest organic dairy farms in the United States that supplies milk to some major grocery stores across the country was released on July 23.

The investigation was done between March and July by Animal Recovery Mission (ARM), a “vanguard investigative animal welfare organization” that accuses Natural Prairie Dairy, based in Channing, Texas, of extreme abuse of cows and unsanitary conditions.

ARM placed its undercover investigator on the farm for less than a month. His job was to vacuum manure and scrape clean feces in the barns, said an operation report (pdf).

The investigator utilized surveillance equipment to capture the violations noted in the report.

The video shared by the investigators on Facebook shows cows being kicked, hit with shovels, and stabbed with screwdrivers by vet crews and animal caregivers.

“Natural Prairie Dairy supplies raw dairy to Aurora Organic Dairy’s bottling plant, which sells to some of the nation’s biggest retailers: Kroger, Target, Costco, and Publix,” ARM said in a message along with the video.

According to a statement sent to The Epoch Times by Target, “Target does not source any milk from Natural Prairie Farms or any dairy from Aurora Organic Dairy.”

“Operation Natural Prairie Dairy stands as the first-ever cruelty investigation into an organic dairy farm in the United States, and the third installment of the largest dairy investigation of all time into Fairlife and Select Milk Producers, Inc.,” ARM wrote on its website.

It said concerned people are being deceived about how their food is produced.

“Amongst these criminal acts upon animals, the investigator documented dairy cows being tormented on a daily basis. Cows were stabbed with screwdrivers, kicked and dragged when unable to stand due to illness and fatigue.

“Cows were repeatedly and violently inseminated and mother cows were witnessed being chased whilst giving birth, and the babies immediately ripped away from their mothers,” the website said.

The violations listed in the report include “maltreatment and excessive abuse daily of cows … neglect of sick and injured dairy cows … squalid, overcrowded, unsanitary housing … force-feeding and scientific research performed on cows.”

“The cows of Natural Prairie Dairy live a life of pure misery and torture. Beaten, stabbed and locked down in feces ridden barns, this is not what consumers imagine when purchasing organic milk and/or cheese. The world has just been schooled on the reality of organic dairy,” said Richard “Kudo” Couto, ARM Founder in the report.

In an official statement on its website (pdf), the Natural Prairie Dairy Farm called the investigation footage “heavily edited video” and says that ARM’s goal is to abolish all American dairy farms.

“But the video fails to show our entire organic farm. It does not show our innovative facilities…our dedicated team members…all our cows…our lush, beautiful grasslands that our organic cows feed upon.

“That said, some of the sequences warrant additional internal and external investigation,” said the press release by Natural Prairie Dairy Farm.

The owners of the farm, Donald and Cheri De Jong said they are very proud to be certified organic dairy farmers and it is their “life’s work—our family organic farm, where we raised our family.”

Natural Prairie Dairy Farm posted a video to “help provide a different perspective” on how the farm cares for its cows:

They said they have welcomed law enforcement in their farm at any time and third-party auditors are scheduled to perform an external audit in their farm on July 25 and July 26.

“One employee involved has been suspended and will have no contact with any of our cows, pending internal and external investigations. Additional suspensions and/or terminations may result pending the ongoing investigations,” said Donald and Cheri De Jong.

According to its website, the Natural Prairie Dairy Farm described as “family founded and family operated” has 14,000 cows and 250 team members.