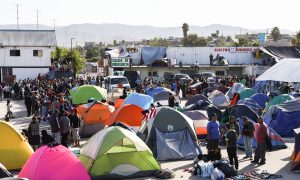 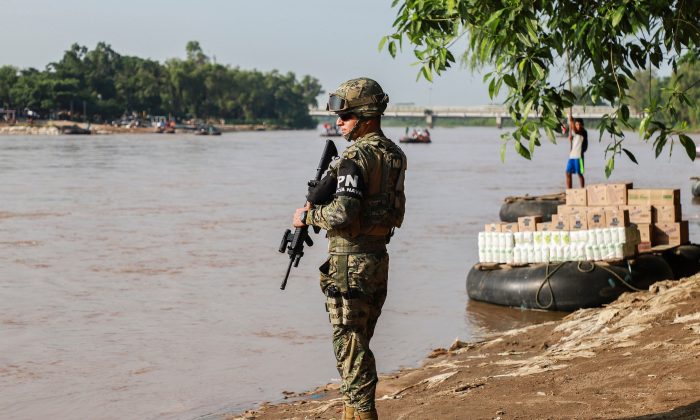 Under US Pressure, Mexico Starts Moving to Secure Its Southern Border

WASHINGTON—As the United States and Mexico advance toward an agreement on how to handle illegal immigration, Mexico is slowly starting to cinch up its southern border with Guatemala.

One reporter during the president’s press conference said he had just spent three days traveling between Mexico and Guatemala without once being asked for documentation. He said convoys of trucks full of migrants have been crossing from Gracias a Dios, Guatemala, to Comitán, Mexico, every night for more than a year.

Mexico is forming a new National Guard force by June 30, of which AMLO said 6,000 troops will be posted to the Mexico–Guatemala border. The National Guard will be formed from members of Mexico’s version of its Coast Guard, federal police, and its army.

The National Institute of Migration said on June 16 that 1,000 officers have already been deployed “in the north and the south of Mexico.”

Data from Mexican immigration authorities shows that 53,000 people were apprehended by Mexican authorities for entering the country illegally in the first four months of 2019. The statistics show that 37,000 were returned to their home countries.

However, with the United States apprehending more than 100,000 illegal immigrants per month, mostly from Central America, it’s clear that most of the migration at Mexico’s southern border is happening outside of legal channels.

In the busiest crossing area, near Tapachula, Mexico, more than 26,800 migrants were apprehended after crossing illegally from Guatemala in the first four months of 2019. It is also the area where non-Central Americans tend to cross.

“The riots or fights inside migratory stations such as Siglo XXI, in Tapachula, are recurrent due to the lack of multilingual staff and, above all, due to overpopulation,” AMLO said on June 13.

Migration officials said in November that the volume of migrants entering Mexico by air from Asia and Africa increased in 45 percent and 36 percent, respectively, from 2017 to 2018. Those migrants tend to head straight to the United States.

An agreement for migration control came about after some testy tweets from Trump, who called Mexico an “abuser” of the United States and threatened to impose escalating tariffs unless Mexico took action.

“People have been saying for years that we should talk to Mexico. The problem is that Mexico is an ‘abuser’ of the United States, taking but never giving. It has been this way for decades,” Trump wrote on Twitter on June 2. “Either they stop the invasion of our Country by Drug Dealers, Cartels, Human Traffickers, Coyotes and Illegal Immigrants, which they can do very easily, or our many companies and jobs that have been foolishly allowed to move South of the Border, will be brought back into the United States through taxation (Tariffs). America has had enough!”

Threats of a 5 percent tariff on all goods, which was to be imposed on June 10, sent Mexican officials scurrying to Washington.

After three days of negotiations, the United States and Mexico reached an agreement that would expand the Migrant Protection Protocols (MPP), commonly known as the “Remain in Mexico” policy and bring increased security at Mexico’s southern border. Under the new MPP arrangement, Mexico would take 1,000 asylum-seekers from the United States per day, rather than the current 250.

The tariffs were averted, but remain on the table if Mexico doesn’t ante up within 45 days, according to Trump.

On June 17, State Department spokeswoman Morgan Ortagus said that no additional foreign aid will be provided for Honduras, Guatemala, or El Salvador until the countries take “concrete actions to reduce the number of illegal migrants coming to the U.S. border.”

“Working with Congress, we’ll reprogram those funds to other priorities,” Ortagus said at a press conference.

Congress is expected to vote next week on a $4.5 billion emergency humanitarian aid package that Homeland Security requested on May 1, to help border officials alleviate the crisis at the U.S.–Mexico border, caused by an average of 4,200 illegal immigrants entering each day.