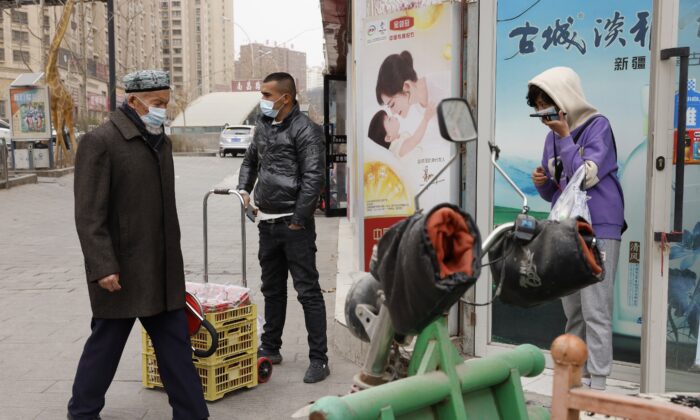 BEIJING—Residents of a city in China’s far western Xinjiang region say they are experiencing hunger, forced quarantines, and dwindling supplies of medicine and daily necessities after more than 40 days in a virus lockdown.

The dire conditions and food shortages are reminiscent of a harsh lockdown in Shanghai earlier this year, when thousands of residents posted complaints online that they were delivered rotting vegetables or denied critical medical care.

But unlike in Shanghai, a glittering, cosmopolitan metropolis of 20 million people and home to many foreigners, the harsh lockdowns in smaller cities such as Ghulja have received less attention until recently.

As more infectious variants of the coronavirus creep into China, flareups have become increasingly common. Under the Chinese regime’s “zero-COVID” strategy, tens of millions or people are experiencing rolling lockdowns, paralyzing the economy, and making travel uncertain.

The lockdown in Ghulja is also evoking fears of police brutality among the Uyghurs, the Turkic ethnic group native to Xinjiang. For years, the region has been the target of a sweeping security crackdown, ensnaring huge numbers of Uyghurs and other largely Muslim minorities in a vast network of camps and prisons. An earlier lockdown in Xinjiang was particularly tough, with forced medication, arrests and residents being hosed down with disinfectant.

Yasinuf, a Uyghur studying at a university in Europe, said his mother-in-law sent fearful voice messages this past weekend saying she was being forced into centralized quarantine because of a mild cough. The officers coming for her reminded her of the time her husband was taken to a camp for over two years, she said.

“It’s judgment day,” she sighed in an audio recording reviewed by The Associated Press. “We don’t know what’s going to happen this time.”

Food has been in short supply. Yasinuf said his parents told him they were running low on food, despite having stocked up before the lockdown. With no deliveries, and barred from using their backyard ovens for fear of spreading the virus, his parents have been surviving on uncooked dough made of flour, water, and salt. Yasinuf declined to give his surname for fear of retribution against his relatives.

He hasn’t been able to study or sleep in recent days, he said, because thoughts of his relatives back in Ghulja keep him up at night.

“Their voices are always in my head, saying things like I’m hungry, please help us,” he said. “This is the 21st century, this is unthinkable.”

Nyrola Elima, a Uyghur from Ghulja, said her father was rationing their dwindling supply of tomatoes, sharing one each day with her 93-year-old grandmother. She said her aunt was panicking because she lacked milk to feed her 2-year-old grandson.

Last week, the local governor apologized at a news conference for “shortcomings and deficiencies” in the authorities’ response to the coronavirus, including “blind spots and missed spots.”

But even as authorities acknowledged the complaints, censors worked to silence them. Posts were wiped from social media. Some videos were deleted and reposted dozens of times as netizens battled censors online.

Multiple people in the region told AP the posts online reflected the dire nature of the lockdown, but declined to detail their own situations, saying they feared retribution.

On Monday, local police announced the arrests of six people for “spreading rumors” about the lockdown, including posts about a dead child and an alleged suicide, which they said “incited opposition” and “disrupted social order.”

Leaked directives from government offices show that workers are being ordered to avoid negative information and spread “positive energy” instead. One directed state media to film “smiling seniors” and “children having fun” in neighborhoods emerging from the lockdown.

“Those who maliciously hype, spread rumors, and make unreasonable accusations should be dealt with in accordance with the law,” another notice warned.

The AP was unable to independently verify the notices. China’s Foreign Ministry did not immediately respond to a request for comment.

Authorities have ordered mass testing and district lockdowns in cities across China in recent weeks, from Sanya on tropical Hainan island to southwest Chengdu, to the northern port city of Dalian.

In the city of Guiyang, in mountainous southern Guizhou province, a zoo put out a call for help last week, asking for pork, chicken, apples, watermelons, carrots, and other produce out of concern they could run out of food for their animals.

Elsewhere in the city, residents in one neighborhood complained of hunger and missing food deliveries, prompting a surge of comments online.