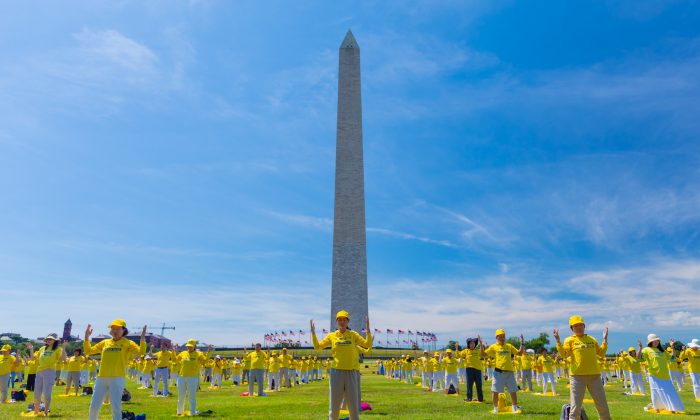 Falun Gong practitioners demonstrate the disciplines exercises in front of the Washington Monument on July 19, 2018. (Mark Zou/Epoch Times)
US News

Under a Bright Sky, a Call to End a Dark Persecution

WASHINGTON—On a warm, sunny day, a group of around 600 people gathered at the Washington Monument with a most gloomy message: “19 Years of Torture; 19 Years of Murder; 19 Years Too Long,” said one banner. They gathered to call for an end to the now 19-year-long persecution of Falun Gong in China, which started on July 20, 1999.

Each of the speakers and participants at the rally had a different story to tell.

For Faith McDonnell, director for religious liberty programs at the Institute on Religion and Democracy, this event “reminds us so powerfully about the terrible violations of human rights committed by the Chinese regime.”

“But it also reminds us of the solidarity that we have together, for those who have been persecuted in China, and for all the tireless efforts on their behalf,” she said.

Noting that “this the is 19th anniversary of the start of virulent persecution against Falun Gong in China,” she asked, “Will the persecution end before we must commemorate the 20th year?”

With similarities to Buddhist practices, Falun Gong involves doing five meditative exercises and living according to the principles of truthfulness, compassion, and tolerance. On July 20, 1999, seeing that the practice had attracted 100 million adherents, and fearing that the Chinese people preferred its traditional moral teachings to communist ideology, then-leader of the Chinese Communist Party Jiang Zemin launched a campaign to eradicate Falun Gong.

To date, more than 4,236 Falun Gong practitioners are confirmed to have been killed through torture and abuse, although, because of the difficulty of getting information out of China, the true death toll is believed to be far higher.

An unknown—yet what could be a terrifyingly large—number of Falun Gong practitioners have been killed for their organs. Many are still in prison and could be killed at any time.

William Murray, chairman of the Religious Freedom Coalition, reminded everyone of the famous words of Martin Niemöller:

“They came for the Jew, and I did not speak out—because I was not a Jew. Then they came for me—and there was no one left to speak for me.”

On the other hand, Falun Gong’s principles, exercises, and meditation “are recognized as workable alternatives to dangerous psychiatric drugs,” Lagemann said.

“Since Falun Gong was banned in China, sales of anti-depression drugs in China increased 138 percent in just a four-year period of time, from 2002 to 2006. Sales of the generic of Zyprexa, an antipsychotic, increased 10-fold from less than $6 million in 2005 to nearly $63 million in 2014.

“There has been a tremendous increase in sales of all major psychiatric drugs in China over the past 16 years.”

David Cleveland, senior volunteer attorney for Catholic Charities of Washington, shared some terrifying numbers and stories: “Here in the United States, we have about 14,000 people on the waiting list for a new liver. We do about 7000 liver transplants a year. Every year, people die waiting.

“It is the same situation in South Korea. But it has become public knowledge that large numbers of Koreans are going to China for transplants. “

He went on the describe how an investigation done by TV Chosun, which showed both Korean-Chinese nurses and Koreans inside a Chinese hospital admitting on camera that it only took two days or weeks to get an organ. “If you pay more money, it goes faster,” one said.

A Husband at Risk

Dr. Zhang Yuhua, a university professor at Nanjing Normal University in China, spoke about her great worry for the safety of her husband, Ma Zhenyu, who is currently imprisoned in China for practicing Falun Gong. The head of the local 610 Office—an extra-legal Party organization formed to direct the persecution of Falun Gong—had promised that her husband “would die in jail.”

Zhang was extremely terrified because the same 610 Office head had promised that he would send her to the labor camp and had succeeded in doing so on his seventh attempt.

Zhang’s blood pressure was so high that the labor camp refused to take her in, until the 610 head bribed the labor camp officials. He took so much trouble just because he had promised Zhang’s husband that he would do so, she said.

Now, the same officer is promising to have Zhang’s husband “die in jail,” so Zhang is making an urgent call to the government and people of the United States to help her husband so that he can be released and join her in the states.

Yi Rong, president of the Global Tuidang Center, said that with 310 million Chinese people already cutting ties with the Chinese Communist Party (CCP) and its affiliates, she is seeing hope that “Chinese people would experience a profound change in their lives after renouncing the oaths they have given to the CCP.”

The Tuidang, or Quit the CCP movement, “is laying the foundation for a future China, where there will be no Communist Party.”

Among them, there are 891 Chinese hospitals and 9,519 doctors who are suspected of having committed live organ harvesting against Falun Gong practitioners, 8,147 individuals from the 610 Office system, and 10,353 individuals from the Political and Legal Affairs Commission.

Wang vowed that WOIPFG would “continue to investigate, as always, the criminal conduct of all institutions, organizations, and individuals involved in the persecution of Falun Gong,” and to “restore and uphold justice in society.” “This is our promise to humanity, and we will never give up,” he said.

Many of the hundreds of Falun Gong practitioners traveled hours to attend the events, and then stood or sat under the baking sun for hours. They later held a candlelight vigil to commemorate their fellow practitioners who have been killed by the Chinese regime.

Interviewed at the rally, they spoke of the faith that sustained them through 19 years, and their belief that the Chinese communist regime is ready to fall.