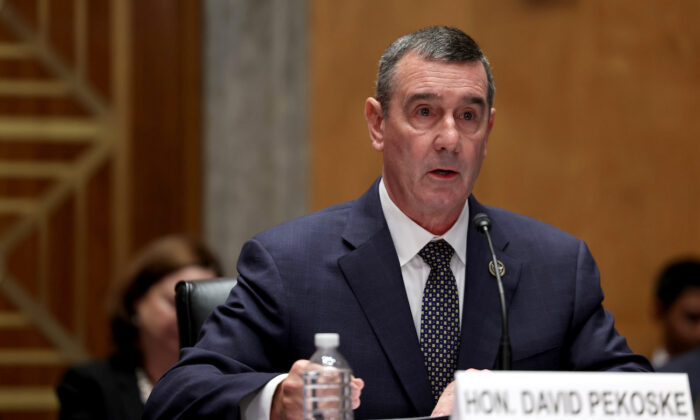 ‘Under 1,000’ Illegal Aliens Used Arrest Warrants as ID to Board US Flights: TSA Chief

The head of the Transportation Security Administration (TSA) told lawmakers on July 21 that “under 1,000” illegal immigrants were allowed to present civil immigration enforcement documents, like arrest warrants, as valid proof of identification and were able to board commercial U.S. flights this calendar year.

TSA Administrator David Pekoske, who was re-nominated by President Joe Biden for a second five-year term, made the remarks during questioning about the policy by Sen. Josh Hawley (R-Mo.) at his confirmation hearing before the Senate Homeland Security Committee.

“How would this policy comport with [US Code Title 8, Section 1325], which criminalizes improper entry [into] the United States by an alien?” Hawley asked.

Pekoske responded: “Those arrest warrants were issued by the border patrol or customs officer. [The arrest warrants] serve as a beginning to our identification process, so you can’t walk up to a checkpoint, wave that form, and [can] go right through into screening. We go through a process to verify that you are the person that you claim to be and that you are receiving the level of screening, which always includes enhanced screening when people don’t have the proper identification.”

Upon further questioning, Pekoske noted the individuals are interviewed by officers present at the checkpoint, and a federal security director would be brought in “if needed.”

“Why would that person not be needed if you have someone who is an illegal immigrant?” Hawley asked.

“We aren’t looking at whether a person is legal or illegal in the country,” Pekoske responded. “Our role is to make sure that people who may pose a risk to transportation that is significant enough to require enhanced screening or to not allow them to fly.”

“So your position is someone who is known to have violated the laws of the United States does not thereby need enhanced screening?” Hawley asked. “You’re not concerned about this person as a security threat?”

“Sir, there are people who violate the laws of the United States every day that fly. We look for things related to transportation security,” Pekoske said.

At the hearing, Hawley said he had not received a response from Pekoske as requested in a letter he sent the TSA chief in January. Pekoske said he would provide a response by July 22.

In the letter, Hawley had asked Pekoske about the TSA policy and said that it “subverts the rule of law and should be rescinded immediately.”

“The point of an arrest warrant is for police to actively seek out and apprehend criminals,” Hawley wrote at the time. “However, you have now confirmed that illegal aliens may present arrest warrants to federal officials to board commercial aircrafts. This dystopian inversion exceeds the point of absurdity where radical open-border policies attempt to accomplish the very opposite of DHS’s core mission: apprehending those who cross our borders illegally.”

Other Senate Republicans also demanded answers in January after the TSA said that it has been allowing non-citizens, including illegal immigrants, to present certain forms issued by the Department of Homeland Security (DHS) as a form of identification if they don’t have any other acceptable ID.

The TSA said in January that it has been allowing non-citizens, including illegal immigrants, to present certain DHS-issued forms as proof of identification if they don’t have any other acceptable documents.

Such forms include ICE Form I-200—a Warrant for Arrest of an Alien (pdf)—which states that probable cause was found to indicate that a person is illegally in the country, and directs immigration officers to remove them. Another form allowed is ICE Form I–205—a Warrant of Removal/Deportation (pdf).

These forms relate to civil—not criminal—offenses.  The TSA has maintained that civil violation documents do not signify that the individual involved is a threat to public safety or national security.

A TSA official defended the policy as a longstanding practice. The official told The Epoch Times back in January that the TSA has been accepting form I-200 for nearly as long as the agency has been in existence; the TSA was created in 2001, in the wake of the 9/11 terrorist attacks. The official said they believed TSA agents didn’t have the authority to arrest illegal aliens. Meanwhile, ICE, when asked whether non-ICE law enforcement agents could enforce the arrest warrants, refused to answer the question.