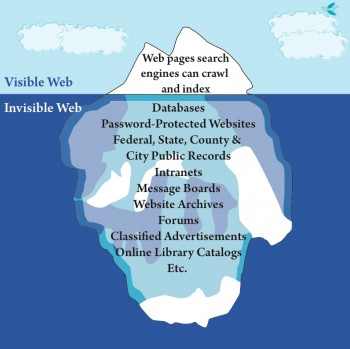 An image representing the 'visible' and 'invisible' Internet. (The Epoch Times)
News

The darknet is considered the Wild West of the Internet and for decades has been a haven for both cyber-criminals and those seeking refuge from the prying eyes of authorities.

As its nebulous sounding name suggests, the darknet is the hidden Internet. Little is typically said about it, but the hacker group Anonymous Operations inadvertently brought light on the darknet by hacking websites under the darknet umbrella.

A common analogy used to describe it compares the Internet to an iceberg—with a small tip visible from the surface and with the bulk of its form looming beneath the water.

The tip of the iceberg represents the Internet as we know it—accessible through search engines like Google, containing all the well-known websites, and that can be accessed through a top-level-domain URL (including .com, .net, .org, etc.)

But the massive chunk of the iceberg beneath the surface is compared to the darknet. While it exaggerates the actual size of the darknet’s base of users, it does serve as a decent point of reference in understanding it—signifying the clear divide between the visible Internet and the invisible Internet.

It is used by some of the darker elements of society, from small-time criminals to large organized crime rings, and gives an “effective tool” for communication and hosting, according to a 2010 report titled “Beware the Darknet,” by Bradford Hutson of the Procysive Corporation and Michael Miller with The Molehill Group.

“It is where the majority of spam and phishing attacks originate,” states the report, adding that the darknet is also “a vast repository of pirated movies, music, and video games.”

Anonymity within such networks plays a key role and is one of the main reasons why people, criminal or otherwise, get involved—it makes them difficult to track by the authorities.

The report states there are “more than 50,000 extremist websites and more than 300 terrorist forums on the darknet, with nearly 1 million messages posted,” and that members of extremist groups can communicate with one another on it without being tracked.

The darknet is not physically separated from the networks of the known Internet, but is an application and protocol layer embedded within it, according to the report. This includes private peer-to-peer networks for file sharing and password sharing, password-protected Usenet groups and bulletin boards, and email groups.

During the 1980s, “data havens” popped up mainly in the Caribbean, giving users a place where “information and activities could be concealed,” according to the report. Yet over time, these havens have become “more visible and brazen,” especially since the physical sites were replaced with virtual servers that gave rise to the creation of the darknet.

The term “darknet” is said to originate from a well-circulated 2002 report from Microsoft employees Peter Biddle, Paul England, Marcus Peinado, and Bryan Willman.

Accessing Areas in the Darknet

A small part of the darknet is comprised of TOR hidden server websites. TOR, a tool often used for anonymity, routes traffic through a collective of volunteer servers around the world, making it difficult for authorities to collect IP addresses or see what a user is browsing. It was developed by the U.S. Navy and was funded by digital rights organization, the Electronic Frontier Foundation.

TOR’s website says the program provides protection “by bouncing your communications around a distributed network of relays run by volunteers all around the world.”

The TOR network hosts its own virtual top-level-domain known as onion, usually behind a website name consisting of scrambled letters and numbers, adding to its secrecy and user anonymity.

Anonymous Operations is taking their attacks on the darknet to TOR, temporarily taking highly illegal websites offline, and dumping more than 1,500 usernames from the sites allegedly hosted under Freedom Hosting.

Recent reports touching on Anonymous’s foray into TOR-based websites have referenced a site called “The Hidden Wiki” that at first glance is a haven for all things illegal and amoral. This allegedly includes eBay-style biddings for contract killers, hacker mercenaries, and other illegal services. There are also links to illegal drug delivery services.

Many other TOR sites, however, are much more benign, with message boards and chatrooms for people who wish to not be traced by authorities for whatever reason.

TOR servers are often used by dissidents to circumvent Internet censorship, with a large base of these users in Iran.

Freenet, a decentralized and anti-censorship data storage program, which began its still-continuing development process in 2000, can also be considered part of the darknet. Accessing it is quite similar to accessing TOR’s hidden services, in that the user has to download a program allowing them to access sites only available on Freenet.

As with TOR, there is questionable or even illegal content uploaded on Freenet. But it has been heavily used by citizens in authoritarian countries including China, since Freenet users can access banned news websites and obtain information and news beyond the Chinese regime’s vast systems of censorship.