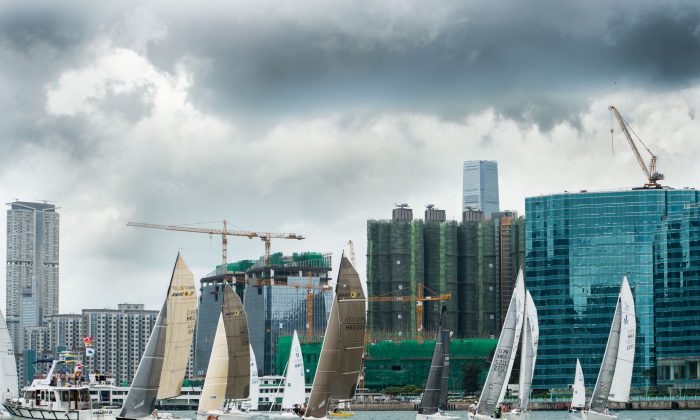 Sportsboats set off on Race-2 of the RHKYC Edmond de Rothschild Spring Regatta from Kowloon Bay on Sunday May 17, 2015. (Ike Li/Prezzimages)
HK Sports

HONG KONG—The Royal Hong Kong Yacht Club’s Edmond de Rothschild Spring Regatta took place on May 16 and 17 attracting 95 boats from 10 Classes. With such a large turnout it is a pity that the weather was rather uncooperative. Unsettled weather over Guangdong brought unstable yachting conditions with winds varying in intensity and direction.

On day one, Saturday May 16, after a lull before the start, Race-1 was greeted with 8-10kt winds but the wind was shifting from northerly to easterly giving Race Officer Simon Boyde some difficulty in setting suitable short and long courses. But courses were set and all Classes started successfully. As the races progressed the wind dropped and short course competitors particularly the Pandora and Ruffian Class boats had difficulty in maintaining forward motion. Their race was shortened to one lap. Later the breeze picked up and all other classes continued to finish their race.

On Sunday May 17 weather conditions were also difficult. The wind direction had shifted to south westerly and was blowing at 10-14kts. Short and long courses were again set with a Kowloon Bay start line for both the short and long courses. But by the time all competitors finished Race-2, the wind had shifted again and after deliberation a new course were laid starting at the Club line (opposite Kellett Island).

The Big Boat Classes, Dragons, Etchells, Sportsboats and Flying Fifteens got off the start line for Race-3 but as the Impalas were about to start, a thunderstorm arrived with wind gusts of up to 40 knts causing turmoil in the fleet, at which point Race-3 was cancelled for safety reasons.

Race Officer Simon Boyde had a difficult task to set courses with such unhelpful weather conditions on both days of the Regatta. Five race Classes, all with their own start times added to the complexity. On reflection, the RO might wish to have done things differently but from feedback received not all boats were happy with the start line set for Race-2, in particular, or the length of the cut off times for the races, resulting in some boats having to wait up to 2.5 hours for the start of Race-3. Had Race-3 been started earlier for classes where all boats had finished, without waiting for the slower boats on the long course to to complete Race-2, some Classes may have finished their Race-3 before the thunderstorm arrived. Of course, decisions are always easier to make in retrospect.

However, according to the Race rules 2-races were sufficient to declare Regatta winners.

In Big Boats 2, “Rampage” (4-points), “Calamansi” (6) and “Andiamo” (6) were the top three boats under IRC ratings while “Kiasu” topped the standings under HKPN ratings.

Dragons
The Dragon Class Regatta prize was won by Virgile Bertrand helming “Shiva”, finishing with 6-points. “Shiva” was followed in the overall standings by Simon Chan in “Kamloong” (8) and Mark Castagnet in “Celines” (11).

Castagnet did particularly well to win Race-1sailing singlehanded, but he was unable to repeat the performance in Race-2 when he retired from the race. Andreas Brechbuhl in “Wyuna” also finished on 7-points but was pushed into 4th place on count-back.

Ethchells
There was a big entry of Etchells Class competitors (19 boats in total) and the top 3 places awards for individual races were spread among eight of the top finishers in the regatta standings. Only 2-points separated the top five boats after completing the two races, but “Easy Tiger” (7) took the first prize with “Gunga Din” second also on 7-points. “Racer x 2” (10-points) came 3rd while “Diva Deux” came 4th also with 10-points.

Pandora and Ruffians
In Pandora Class, “Solstice” finished with two wins to take first place with an unbeatable score of 2-points, “Panache” was runner-up in both races and came 2nd overall while Joseph Wong came 3rd in “Muka”.

In the Ruffian Class Nick Bryan helmed “Buster” into first place just heading Fook Hing Li in “Victory 9” on count-back by virtue of his win in Race-1. Anthony Tong came 3rd in “Helios” but “Miss Piggy” and “Skellum” were both close behind him on 10-points.