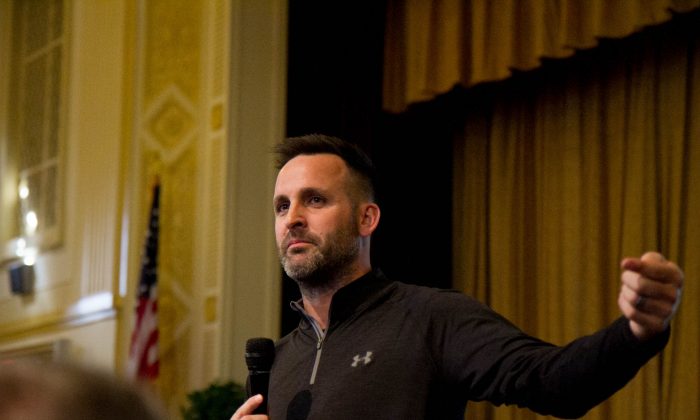 Cody Hodges, a former Texas Tech University and Tennessee Titans quarterback speaks to student athletes as part of an Uncommon Athlete program at C.J. Hooker Middle School in Goshen on March 4, 2016. Hodges helped Texas Tech get to the 2006 Cotton Bowl Classic and led the nation in passing that season with 4,197 yards. (Holly Kellum/Epoch Times)
New York

Efforts are being made to stop bullying and hazing, beginning with high school athletes
By Holly Kellum
biggersmaller
Print

GOSHEN—There’s a price to pay for being an Uncommon Athlete, and that price, according to Cody Hodges, is perseverance, relationships, integrity, courage, and empathy (PRICE).

As part of an effort to cut down on bullying and hazing, Hodges, a former quarterback for Texas Tech University and the Tennessee Titans, addressed high school athletes from 18 Orange County schools at C.J. Hooker Middle School in Goshen on March 4.

“As athletes, people are going to look at you and follow what you do,” he said. “You set the tone for your entire school.”

The event was sponsored by the Orange County district attorney’s office, and DA David Hoovler said the reason why the program is so important is because he had investigated nine cases of bullying or hazing in the county just last year.

“If you’re over 16 and you bully somebody or you haze them, it could become my job to see that you are arrested and prosecuted,” he warned the students. “That’s the last thing I ever want to do.”

He said he hopes to bring the Uncommon Athlete program, a collaboration between Rachel’s Challenge and the Cal Ripken Sr. Foundation, to individual schools as early as this year.

Addressing the longtime rivalry between Port Jervis and Middletown, something the presentation discussed, Amato said it did not stop him from befriending a Middletown football player when he was younger, but said that was the exception, not the rule.

“It didn’t matter that he was from Middletown, he was my friend,” he recalled of a Port Jervis–Middletown football game. “So we walked out and met each other at the 50-yard line. The field was silent, you couldn’t hear nobody… and all of a sudden these photographers were coming out taking pictures of us because they had never seen nothing like that.”

That was 30 years ago, and they are still friends to this day.

He said he hopes presentations like this will help students see the bigger picture and not get caught up in the negativity of the rivalry.