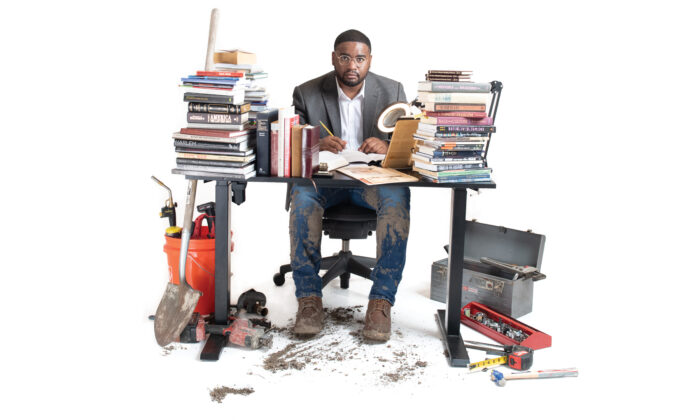 Image from the poster of the documentary "Uncle Tom II: An American Odyssey."(Courtesy of Justin Malone)
Defending America

The Civil Rights Movement was perceived as a high point in American history and a great victory, but one of its outcomes was a rhetorical and cultural shift that instilled in black people a sense of oppression and victimhood, said the documentary filmmakers of “Uncle Tom II: An American Odyssey.”

In terms of black culture, the movement “moved black people from a trying race to a crying race, where we learned to be victims; we learned to be individuals who are now dependent on the state and the government,” said Chad Jackson, who co-wrote and starred in the film.

Before the civil rights movement, however, black people depended on their men, their families, and their churches, which were a kind of central hub for prosperity and productivity, Jackson told EpochTV’s “Crossroads” program in an interview.

“Uncle Tom II” reveals the strategy of the gradual demoralization of America using Marxist infiltration of its institutions, and black America as its number one tool, with the goal of “obtaining power, destroying capitalism, and replacing God with government,” according to the film’s website.

The filmmakers found it especially important to lay a foundation because a lot of people have never learned about Karl Marx, Mao Zedong, and Joseph Stalin—who they were, or the principles of the communist ideology and how it works, Malone said during the joint “Crossroads” interview with Jackson.

Marx was the founder of the communist doctrine, while dictators Stalin and Mao imposed the doctrine on their societies in Russia and China, respectively, making these countries totalitarian states.

The Civil Rights Movement of the 1950s and 60s took various forms of activism with the goal of obtaining equal rights under the law for black Americans in the United States.

Jackson believes that racial tensions, used by communists as a tool to penetrate America, is a strategy devised by Moscow which dates as far back as the 1920s.

In fact, in the late 1920s, the Communist Workers Party of America believed there to be great potential for revolution among black Americans (pdf).

In the 1960s, two organizations of the civil rights movement—the Revolutionary Action Movement and the Maoist Black Panther Party—received support from the communist parties in the Soviet Union and China.

Moscow-trained Leonard Patterson left the Communist Party USA (CPUSA). He later was one of the relatively few who made available to the government his knowledge about the plot against America. In testimony before a congressional committee, he said that violent African-American organizations that incited race riots in several U.S. cities in the summer of 1965 enjoyed strong support from CPUSA.

The Marxist archetype of class struggle, which pits two social classes—the bourgeoisie called the oppressor, and the proletariat the oppressed—against each other to divide and conquer, was later expanded by communist thinkers to other criteria like race or gender.

While the civil rights movement successfully brought race relations into public discussion and helped Americans heal some of the nation’s deepest divides through peaceful means, such as legislation, demonstrations, boycotts, and education, left-wing revolutionaries have continued to use racial conflict as a springboard for their radical agendas.

The filmmakers found in the archives they explored for the documentary some “treasure troves” such as footage made by minister and amateur filmmaker Solomon Sir Jones in the 1920s, and works of Richard Samuel Roberts, a photographer from South Carolina, dating from 1920 and the 1930s, Malone said.

While reviewing their legacy, the filmmakers discovered that “the [Black] South wasn’t what we had been taught our entire life,” Malone said.

“There was a lot of prosperity happening. Black America was on the rise.”

Black America was probably one of the quickest advancing cultures in terms of literacy rates, prosperity, and entrepreneurship, Malone said. “Yet, we’re not taught that.”

The documentary filmmakers decided to put a lot of focus on that part of black history in their film, he explained.

“It was just really important for us to show that black America has not always been this oppressed victim culture. It was actually very American, very patriotic, very faith-based, very honorable.”

Fathers and grandfathers of these young people came out of this southern culture that was led by people like Booker T. Washington, and others, who employed the phrase: “Cast down your bucket where you are,” meaning, regardless of what your circumstances are, who you are, where you are—be productive and seize opportunities, Jackson explained.

Booker T. Washington was the founder and first president of Tuskegee Normal and Industrial Institute (now Tuskegee University) and an adviser to two American presidents.

Those black southerners believed in the Christian faith, which taught them family values and principles such as, “if you don’t work, you don’t eat,” Jackson said.

As a result, they became entrepreneurs and honorable men—strong, courageous—and ethical women, and respectful children, Jackson added. “This was the reality of the so-called black community.”

Malone said that although he learned in school about slavery, black protests, oppression, and heroes that grew up with it, he had not been taught about Booker T. Washington and did not know who he was until he had started working on “Uncle Tom.”

“The fact, that schoolchildren are not educated about Booker T. Washington, is criminal, in my opinion. He’s one of the greatest Americans that ever lived,” Malone added.

One of the communist tactics is to use the youth, Jackson said, and once the communist ideas gained popularity amongst the youth, the adults have no choice but to recognize them and accept them over time.

Communists used college groups, such as the Weathermen, or high school groups that were formed in the 1960s to rebel against the adult generation, Jackson said.

The Weathermen, later known as the Weather Underground, was a domestic terrorist organization inspired by communist ideologies. The group was responsible for terrorist attacks and crimes such as the 1981 robbery of a Brink’s armored truck and the murder of two Nyack police officers and a Brink’s guard in Nanuet, New York.

In the 1960s, a rhetorical shift took place, initiated by the student movements that instilled in black people a victimhood mentality, Jackson said.

As a result of that shift, young people rejected Booker T. Washington’s principle that was upheld by their grandfathers and fathers and adopted instead a mindset that resulted in bitterness, agitation of spirit, and “this kind of feeling of America owes me something, “ Jackson explained. That kind of shift went on into the 1970s, he added.

The narrative shift was followed by a shift in culture with the appearance of blaxploitation, he said. Blaxploitation is a film genre featuring African-American characters, settings, and themes that often emphasize sex, violence, and crime.

Jackson believes that burying the footage and photos depicting the prosperity and values of the black community before the civil rights movement was a communist tactic to stir racial tensions to drive a wedge between Americans.