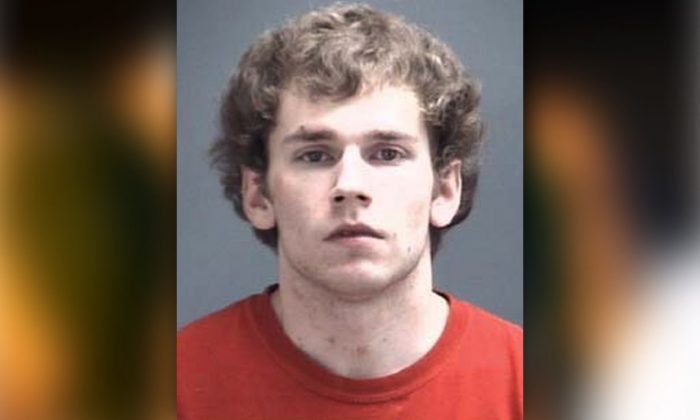 Kwin Boes, 23, was attacked after being sentenced in connection with the death of his 3-month-old son. (Gibson Co. Sheriff's Office)
Crime and Incidents

Uncle of Slain Infant Punches Killer In the Face Outside Courtroom

An Indiana man convicted of killing his 3-month-old son was attacked outside the courtroom by a family member who punched him several times.

Kwin Boes, 23, was sentenced to 25 years behind bars on Wednesday, July 3, 44News reported. The judge also ruled that Boes must cover the funeral expenses for Parker, his infant son who died of blunt force head trauma.

Boes was arrested in May 2018 and charged with murder.

KCBD reported that Boes later reached a plea deal in which the judge dismissed two level 1 felony charges in exchange for him pleading guilty to domestic battery resulting in death.

As deputies were leading Boes out of the courtroom, WPXI reported, the deceased child’s uncle lunged at the convict and hit him at least twice in the area of his face.

The attacker was later identified as Jamie Hartley, the brother of the child’s mother.

Footage showed deputies rushing to restrain Hartley, who was brought down to the ground.

Deputies cuffed Hartley, WFLA reported, and took him into custody. He faces charges of battery.

WPXI posted the story on its Facebook page, where it sparked strong reactions.

“I really don’t feel bad for the man in orange,” one person wrote in the comment section.

Another suggested leniency for Hartley, saying, “The uncle shouldn’t be charged with anything.”

The incident recalls the recent case of a Michigan man accused of shooting his wife to death and then being nearly attacked in court by the victim’s son.

Flowers is a suspect in the May 19 shooting of 50-year-old Jamie Thomas-Flowers, who was at her home in Muskegon Heights, Michigan, when she was shot multiple times.

According to Muskegon Heights Police Chief Joseph E. Thomas Jr., the suspect kicked in the door at around 6:30 a.m. and shot his wife four times in the torso with a handgun.

Flowers then fled on foot but later turned himself in to Muskegon Heights police.

The Attempted Attack in the Courtroom

The video from MLive shows the victim’s son, London Thomas, jumping up from his seat and leaping over a courtroom barrier, at which point he ran towards the suspect, who at the time was seated in a jurors box, in an attempt to attack him.

Thomas was quickly apprehended by courtroom police and then arrested.

According to police, Thomas was later brought before Muskegon County District Judge Raymond Kostrzewa where he was held in civil contempt of court and barred from any future proceedings in the courtroom.