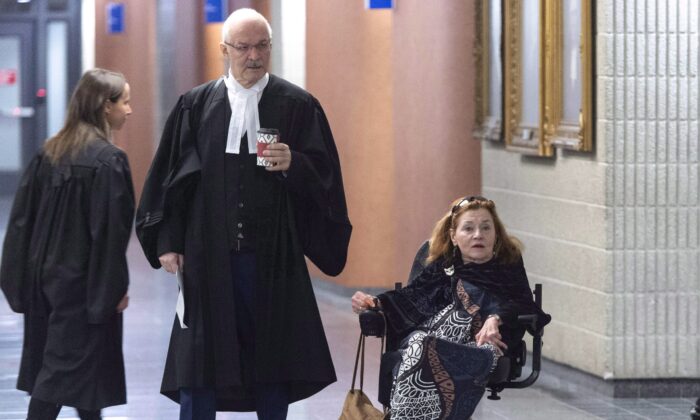 Nicole Gladu, who is incurably ill, and her lawyer Jean-Pierre Menard arrive at the courthouse in Montreal on Jan. 7, 2019, for the beginning of a trial challenging provincial and federal laws on medically assisted death on the grounds they are too restrictive. (The Canadian Press/Paul Chiasson)
Canada

A health policy expert is warning that Canada is moving too fast on changes to legislation that would expand eligibility for medically assisted death.

Dr. Harvey Schipper, a professor of medicine and an adjunct professor of law at the University of Toronto, urges caution, saying calls to extend euthanasia access to mature minors and people suffering from mental illness should be rejected by the government.

“We are moving too quickly, without evidence or understood experience, down a pathway of immense societal consequence,” Schipper says in a report he authored on medical assistance in dying (MAiD).

“We have entered uncharted territory and therefore must proceed cautiously, with great attention to the detail of each and every instance.”

Schipper, who was a member of the Council of Canadian Academies expert panel on MAiD, is concerned that a “slippery slope” effect could lead to continuous expanding of the criteria.

Federal Justice Minister David Lametti plans to table legislation sometime this month to revise the rules for medically assisted death. The move comes in order to fulfill a requirement in Bill C-14 that the law be reviewed five years after it came into effect.

To date, doctors have helped some 7,000 Canadians die since MAiD was enacted in June 2016, following a Supreme Court of Canada decision the previous year.

Under the criminal code, Bill C-14 provides exemptions to physicians of patients who are experiencing “unendurable suffering, with no end in sight,” allowing medical practitioners to prescribe lethal drugs or other means to assist in death.

MAiD was advanced a step further in September 2019 after a Quebec Superior Court decision removed the provision that death must be “reasonably foreseeable” for euthanasia. With the five-year review coming up, extending MAiD to mature minors and those suffering from mental illness is being considered.

Schipper is calling on the federal government to reject such changes, noting that there are serious ethical considerations that remain unanswered.

One of his major concerns is that, while settled law, prior opinion, and precedent are sound justifications from a legal standpoint, they are not satisfactory for bedside clinicians “who must make forward-looking decisions amid uncertainty.”

The matter of consent is also crucial, he says in the report. Consent, from a clinical perspective, is highly ambiguous and not measurable.

“Just imagine being asked to make a very nuanced assessment of your risk and prognosis while writhing in pain, having just been hit by a truck, or in the middle of a heart attack,” Schipper says.

“Nowhere is that considered. Yet capacity to consent is fundamental to the entire MAiD process.”

Nor is medically assisted dying “neutral” in its values, as Bill C-14 maintains it to be, he adds.

The legal framing of MAiD, premised on the value of individual autonomy, is derived from the Canadian Charter of Rights and Freedoms, while faith-based and religious values are systematically excluded, Schipper explains. He says religions’ underlying codes have deep experience in the area of the end of life and should be represented in the legislation.

“If Canada is to come to some accommodation about a role for MAiD, then moral voices have to have equitable standing,” he says. “What is to be allowed in MAiD is entirely driven by values—not science, not technology, not even evidence, but the moral code of each participant.”

A medical practitioner’s role, in the Hippocratic tradition, is to “unpack” the roots of suffering in order to alleviate the perceived wish to die, the report states. Such practitioners should view the patient’s overall situation holistically and present euthanasia as a last option, after carefully and laboriously considering other options. MAiD alters that approach.

“As things currently stand, if a patient meets current (shifting and imprecise) regulations, a provider strongly disposed to providing MAiD is able to tick the procedural boxes and proceed.”

In January, the government held consultations on the proposed changes, including an online survey in which the public could participate and in-person consultations with experts across the country.

When the consultations were launched, Lametti said they “will allow us to hear directly from Canadians and guide the path forward.” But some were unhappy with the survey. A Winnipeg woman who lives with disabilities resulting from childhood polio said she perceived a “huge imbalance” in the questions.

“There are so many things [in the survey] that promote [medical assistance in dying]. I could find nothing that discourages it. There was no place that I could find where people could complain about undue influence,” Ruth Enns told CBC.

Lametti has said that more than 150,000 people participated in the survey.