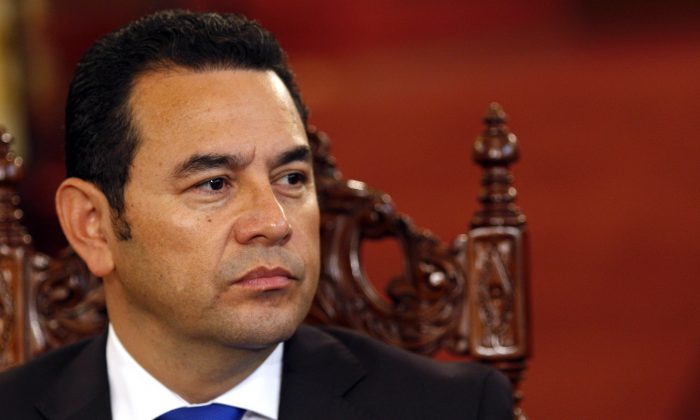 Comedian Jimmy Morales, who's running for president with the National Front of Convergence party, attends a meeting at the National Palace with his rival to sign an agreement to respect governmental institutions ahead of the election in Guatemala City, Thursday, Oct. 22, 2015. (AP Photo/Luis Soto)
Americas

GUATEMALA CITY—TV comic and political neophyte Jimmy Morales was being inaugurated as Guatemala’s next leader on Thursday amid uncertainty over how he plans to run the Central American nation beset by entrenched poverty, rampant corruption and violent criminal gangs.

Morales has yet to say who will make up his Cabinet, and he already suffered one political setback when prosecutors formally asked for the equivalent of impeachment proceedings against an allied lawmaker suspected of human rights violations dating to Guatemala’s civil war.

“He is a president who takes office without a party, without well-qualified people he trusts and with a state apparatus that’s really in financial and institutional ruin,” said Edgar Gutierrez, an analyst at San Carlos University in Guatemala.

Morales won office in a runoff Oct. 25 after huge anti-corruption demonstrations forced former President Otto Perez Molina and his vice president from office. Both are behind bars and facing prosecution, and the outsider’s triumph was seen as a punishment vote from an electorate that wanted a fresh break.

Two and a half months later, Morales’ most visible activities have included a tour of Central American nations and a visit to Guatemalan migrants’ advocacy groups in the United States. He was entirely out of the public eye for the last two weeks until Tuesday, when he appeared at a ceremony to hand over 30 houses to survivors of a deadly landslide in October. He announced that two currently serving ministers will remain to finish homebuilding efforts related to the disaster.

But Morales didn’t follow through on a promise to name key Cabinet posts such as education, economy, health, defense and the interior in December. Until Guatemalans know who those lieutenants will be, they worry that Morales could end up tapping what they see as a discredited political class.

Gutierrez said the president-elect would have been well-advised to spend the last two months creating alliances to construct a government, “but he didn’t do that.”

Morales spokesman Heinz Heimann vowed that the incoming team will be of the high quality necessary to respond to Guatemalans’ needs and expectations.

“There is nothing suspicious about our actions,” he told The Associated Press via text message. “The government reserves the right to give information in a pertinent manner to keep the people informed.”

One list of possible Cabinet appointments was published by a local newspaper Wednesday, but it was not confirmed by officials.

Heimann promised the Morales administration will be marked by “strict adherence to the law” and called on different sectors of civil society to play a role in leading the country, but did not advance any more information on the new government’s plans.

Daniel Pascual, leader of an umbrella organization for rural and indigenous Guatemalans, said Morales has not reached out enough to those groups about how to address social demands.

“He has said there are some indigenous people with him, but not those of us who have come to make proposals for structural changes,” Pascual said. “It’s shaping up to be a weak government incapable of forming alliances.”

Prosecutors last week moved to lift the immunity of office for Edgar Justino Ovalle, a lawmaker and adviser to the president-elect. He and others are suspected of human rights abuses during the 1960-1996 civil conflict when some 245,000 people were killed or disappeared, many of them indigenous Guatemalans slain in countryside massacres.

More than a dozen retired military figures were arrested in the same case. Many of them are members of a veterans’ group that supports the National Convergence Front, the party Morales ran with during the campaign. Ovalle is a party founder.

Although Morales has denied links to the former military officials, some say the allegations amount to a black eye for his new administration.

“You can read it as saying: ‘Look, Mr. Morales, do a better job of picking your allies … because these are unqualified people who have serious accusations against them,'” Gutierrez said.

U.S. Vice President Joe Biden is scheduled to be present Thursday as the highest-level Washington official to attend a Guatemalan inauguration in 30 years of civilian-democratic governments.

Biden visited the country last year for talks with Central American leaders about a billion-dollar aid package requested for the region that aims to improve security and quality of life, and lower migration rates after the surge of unaccompanied minors showing up at the U.S. border.

Those impatient for reform have signaled they intend to hold Morales to his promises to clean up government. A public protest has been called for Saturday, just two days after the inauguration, to remind the new president of his campaign slogan: “Neither corrupt nor a thief.”

“We are not going to wait very long,” Pascual added. “The people are already calling for protests, to make him see that we are here.”