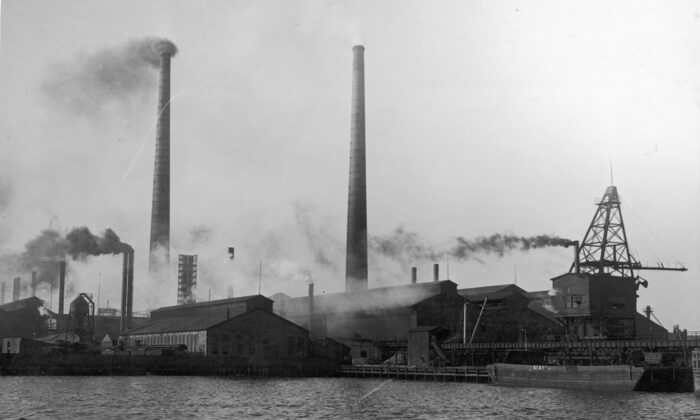 View of a Standard Oil plant, which is located on a wharf, circa 1915. (Edwin Levick/Hulton Archive/Getty Images)
Viewpoints

Decades before wokeness reduced the practice of canceling famous Americans to a mindless ritual, progressive historians agreed to cast John D. Rockefeller and Standard Oil in the most unfavorable of lights. Few question the “official” condemnation of Rocky and Standard today. Thus, just a few days ago in this publication, I encountered this typical historical treatment:

“John D. Rockefeller was the undisputed oil king and during this time the New York World called his company, Standard Oil, ‘the most cruel, impudent, pitiless, and grasping monopoly that ever fastened upon a country.’ Standard Oil’s grip on oil lasted until 1906, when the U.S. government sued to break up the concern citing the Sherman Antitrust Act of 1890.”

That characterization is flawed; in fact, it’s a mischaracterization. Each of the two sentences I quoted contains an important factual error. As for the hyperbolic, condemnatory rhetoric in the quote from New York World, I ask you to reserve judgment until you read the rest of this commentary.

The first error is simple and indisputable: Standard Oil never had a monopoly—it was never the sole American producer—whether of oil production, transportation, refining, or the refined products of kerosene and gasoline. Undeniably, Standard was the King Kong of the oil world, and Rockefeller swallowed up or crushed numerous competitors, but the corporation never achieved a monopoly.

As for the lurid description of Standard Oil as “the most cruel, impudent, pitiless and grasping …” well, let’s cut through the rhetorical flourishes and reexamine that assertion. I will address the two most serious allegations: “most cruel” and “pitiless.” As for “impudent” and “grasping,” my only comment is that they’re superfluous, highly subjective, and totally useless verbal excesses that do nothing more than waste space.

Undoubtedly, competing against Rockefeller and Standard Oil was not for the faint of heart. In those rough and tumble, dog-eat-dog days of largely unfettered capitalism, trying to out-compete Rockefeller often was a losing bet. Many of his competitors took the smart way out: They accepted buy-out offers from Rockefeller and made far more money from the Standard Oil stock they received than they ever could have earned had they held on to their businesses. Those who did hold on may be admired for their spirit of industry and independence, but it usually was not a prudent business decision.

Rockefeller understood economies of scale. He was able to obtain lower rates from railroads that transported his product by guaranteeing them large volumes and even paying for the loading and unloading of his products. It was a deal the railroads would have been crazy to refuse. And yes, the railroads raised their rates to the smaller shippers as part of their deal with Rockefeller, partly because of Rockefeller playing hardball and partly because the smaller shipments were indeed more costly to handle due to manpower and time considerations.

Question: Why do businesses exist? Is it not to provide goods and services to consumers? And is it not those businesses that excel at serving customers that thrive and grow? This is what Rocky and Standard Oil did. Ah, but this raises another question: Why do we despise monopolies? Isn’t it because we fear that they will use their monopoly to charge consumers inflated prices? That is what Rocky and Standard Oil most definitely did not do.

And yet, in 1906, Uncle Sam sued Standard Oil as a monopoly under the Sherman Antitrust Act of 1890. What was the crime? Charging consumers lower prices? Rather than being hounded by the Justice Department, companies like Standard deserved, if anything, praise. Few correlations in economic history are more significant than the high correlation between oil consumption and standards of living. It’s no exaggeration to state that modern prosperity was powered by oil, and that those who brought oil to market and lowered the price while doing so deserve our commendation and gratitude.

The only plausible reason for why Uncle Sam broke up Standard Oil is that Standard’s success caused competitors to go out of business. Here we see the great intellectual confusion that has pervaded American antitrust law from the beginning: We want to promote competition, but we punish companies that win the competition. Well, what other outcome would you expect from competition other than to produce winners and losers? As long as consumers benefit, as they perennially did during Standard Oil’s heyday, the free-market system is working as it should.

And this brings us to the other factual error—the other entrenched myth—about Standard Oil: that the government was needed to break up Standard Oil’s alleged “grip on oil.” What actually loosened Standard Oil’s grip on the oil market was not Uncle Sam, but free-market competition. Standard Oil’s market share was already in decline before the government launched its antitrust suit. The Justice Department simply jumped on board a train that had already left the station.

By the way, besides blessing America with lower energy prices, John D. Rockefeller was a great conservationist. The typical practice during his time was for petroleum refineries to produce their fuel and then dump the remaining sludge somewhere in our natural environment. Rockefeller rebelled against such wasteful, polluting, short-sighted practices. He hired chemists to figure out possible uses of petroleum “waste.” The resulting search yielded such useful products as asphalt, synthetic rubber, plastic, vinyl, ball-point pens, fertilizers, photographic film, pharmaceutical applications, shoe polish, transparent tape, and literally thousands of other products we now take for granted.

For those who have been taught by ideologically motivated propaganda to despise mega-rich entrepreneurs like John D. Rockefeller, may I recommend historian Burt Folsom’s illuminating study, “The Myth of the Robber Barons”? Independent entrepreneurs such as Rockefeller have enriched our country and the world. The real snakes in the grass are the pseudo-entrepreneurs—the cronies—who siphon money from government to their own pockets. The counterfeits are the ones who merit our opprobrium. The genuine wealth producers are the good guys.