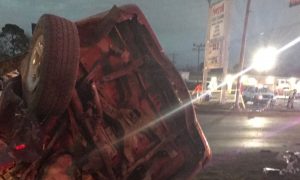 A pregnant woman lost her unborn child during a hit-and-run accident along U.S. Route 68 in Todd County, Kentucky.

Sheriff Tracy White issued a statement about the incident, asking anyone with information about the crash to contact the sheriff’s department.

“Somebody knows who this person is, and if it was your family you would want someone to come forward… so I’m asking for anyone’s help in helping us to resolve this situation,” said White in a video on Facebook on Jan. 3.

Deputies responded to the crash on US-68.

White stated that a newer model Dodge truck with a silver livestock trailer suddenly pulled out in front of a vehicle heading east.

The driver of the vehicle wasn’t able to stop in time and slammed into the livestock trailer.

The driver of the truck and trailer left the scene after the crash.

The mother was identified as a 23-year-old female who was nine months pregnant. The woman’s name was not released by police.

The baby died in the crash, the sheriff stressed, adding the child was due in mid-January 2019.

“Today Zayden Matthew Barry didn’t get to start his life because someone got in a hurry and were selfish enough to just leave the scene,” said White of the unborn baby.

Todd County is located in southern Kentucky near the Tennesse border.

The deaths occurred across 34,439 fatal motor vehicle accidents. The number means 11.6 deaths per 100,000 people and 1.16 deaths per 100 million miles traveled, although those numbers can vary widely across states.