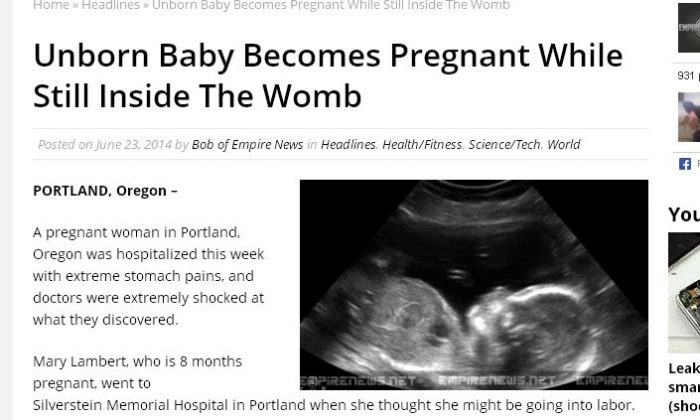 An article saying an unborn baby has "become pregnant while still in the womb" is fake. (Empire News/ Screenshot)
Social Media

Unborn Baby ‘Pregnant While Still Inside The Womb’ Article is Fake; Mary Lambert Report Not Real

An article saying an unborn baby has “become pregnant while still in the womb” is a hoax.

The fake report was published on Empire News, a self-described “satire” website.

“A pregnant woman in Portland, Oregon was hospitalized this week with extreme stomach pains, and doctors were extremely shocked at what they discovered,” the fake report says. “Mary Lambert, who is 8 months pregnant, went to Silverstein Memorial Hospital in Portland when she thought she might be going into labor. Doctors examined her, and initially could not figure out what was causing Lambert’s pain. After an ultrasound to check on her baby, they were taken aback to find that her unborn daughter was also pregnant.”

According to a disclaimer, Empire News doesn’t post real stories.

“Most works presented in this website are satire, parody, spoof and are completely fictitious,” a disclaimer says. “Neither we nor any third parties provide any warranty or guarantee as to the accuracy, timeliness, performance, completeness or suitability of the information and materials found or offered on this website for any particular purpose.”

It also says: “Empire News is a satirical and entertainment website. We only use invented names in all our stories, except in cases when public figures are being satirized. Any other use of real names is accidental and coincidental. All contributors are responsible for the content of their own material in respect to (but not limited to) copyright, libel and defamation.”

Empire News has been responsible for a few other hoaxes, including one saying mass murderer Charles Manson was released from prison and is on parole.

The “pregnant unborn baby” article had a few thousand “likes” and shares on Monday.

Some users apparently believed the fake report and tweeted about it.

“Absolutely impossible… has not developed any eggs or hormones or even a sustainable uterus.. There is no such thing (sic),” one person said.

“If you look at the bottom of the article.. It’s written by a potato named bob… Come on people. Lol,” another wrote.