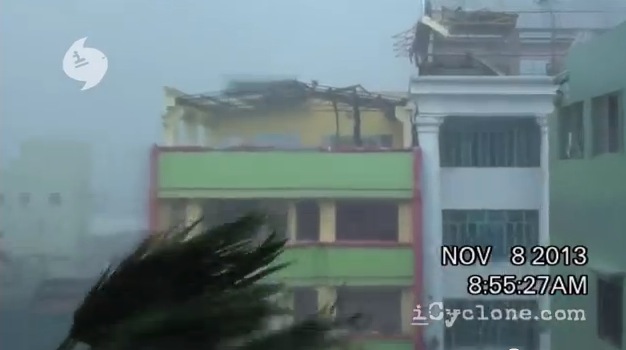 This amazing video is from veteran storm chaser Josh Morgerman who has been chasing tropical cyclones since 1991. He chased the Category-5 Super Typhoon Haiyan (Yolanda in the Philippines)—one of the worst weather catastrophes of the past decade—to ground zero in Tacloban City, Philippines. The date Filipinos will forever remember was November 8, 2013.

Morgerman, along with two other storm chasers James Reynolds and Mark Thomas, documented the ferocious typhoon from Hotel Alejandro, a four-story, concrete building standing 26 feet above sea level in the heart of downtown.

This video, posted on Morgerman’s website  iCyclone.com, is a 12-minute teaser to a longer documentary. Still it shows the monster storm in graphic, frightening detail.

An interesting background note Morgerman includes is that some of this footage was almost lost:

“At the height of the storm—as water flooded the building—I threw my camera into a flower pot in the lobby so I could help rescue trapped guests. The storm surge swept everything away. After the cyclone passed, I found the camera in the wreckage. It was ruined, but I salvaged the damaged memory card, and a data-recovery service back home in Los Angeles was able to save the files! In the video, these are the particularly dramatic shots that happen from 7:39 to 7:57 am.”

The video is disturbing to watch in some parts as windows explode, people become hysterical facing mortal danger, and the storm water inundates the hotel. Morgerman defends his work as an important meteorological record. It provides rare footage of exactly how the historic storm played out, and he risked his life to get it.