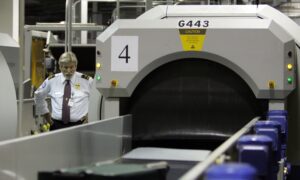 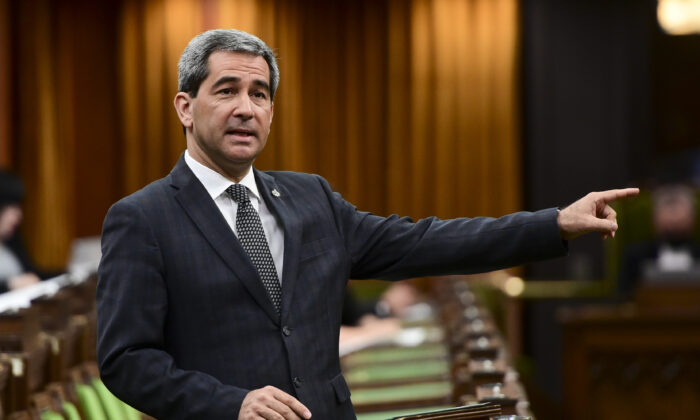 Conservative MP Pierre Paul-Hus rises during question period in the House of Commons on Parliament Hill in Ottawa on May 14, 2021. (The Canadian Press/Sean Kilpatrick)
Canada

The fact that a federal shipbuilding contract ended up going to a Chinese state-owned conglomerate is “unbelievable,” especially when Canadian citizens Michael Kovrig and Michael Spavor continue to be arbitrarily imprisoned in China, says Conservative candidate Pierre Paul-Hus.

Paul-Hus, a Conservative MP and his party’s shadow minister for public safety before the election was called, was responding to the news that a Crown corporation awarded a $100 million ferry contract to a Swedish company, which in turn subcontracted the construction of the 200-metre vessel to a Chinese state-owned company.

“The Conservative Party are very upset with this,” Paul-Hus told The Epoch Times. “Especially with the all the trouble [Canada has] with the Chinese government, with the two Michaels, all the issues with the Uyghurs. It is unbelievable for us.”

The Globe and Mail reported that Marine Atlantic Inc., a Crown corporation, awarded a $100 million, five-year contract for a 200-metre passenger ferry to Sweden’s Stena North Sea Ltd., which subcontracted the construction of the vessel to China Merchants Industry’s Jinling Shipyard, a huge state-owned operation based in Nanjing.

“We cannot support this because we have shipyards in Canada that can build that kind of vessel,” Paul-Hus said. “So the first question is, why do we give some contracts over there, to the Chinese government?”

According to a Marine Atlantic press release, the deal with Stena was made following a competitive procurement process that was open to domestic and international bidders and “overseen by an independent fairness monitor.”

Marine Atlantic has the option to purchase the ferry from Stena at the end of the five-year charter agreement, the release said. The 1,000-passenger ferry is due for delivery in 2024-25 and will operate between the provinces of Newfoundland and Labrador and Nova Scotia.

A Marine Atlantic spokesperson told the Globe that “the ownership of the shipyard selected by Stena was not considered within the procurement process,” referring to China Merchants Industry.

Paul-Hus says that while it’s fine for the federal government to sign deals with Stena, they should have checked who Stena’s subcontractors are first. In addition, Chinese state-owned companies are heavily subsidized and it makes no sense to have them compete with Canadian companies.

“At the moment, we’re funding a Chinese company. We have to understand that [Jinling Shipyard] is subsidized by the Chinese government. Companies in Canada [are having] very huge difficulties to have the same price—they cannot bid on the same level,” he said.

He added that the awarding of the contract will send a negative message to Canadians.

“When you see that our own government gives some contracts in China, especially to Chinese [state-owned] companies, people cannot understand that. They say come on, we need to have jobs here in Canada first.”

This isn’t the first time the procurement process at the federal level has come into question. Last July, Chinese company Nuctech was awarded a $6.8 million contract with the federal government to install X-ray security equipment in 170 Canadian embassies, consulates, and high commissions around the world.

The deal raised immediate security concerns given Nuctech’s connection to the highest levels of the Chinese Communist Party, having been founded by the son of former CCP leader Hu Jintao, as well as its links to the Chinese military.

In testimony before the Standing Committee on Government Operations and Estimates on Nov. 17, 2020, Lorenzo Ieraci, acting assistant deputy minister for Public Services and Procurement Canada, said “procurement processes are based on the security threats and risks identified by our client, which in this case was Global Affairs.”

“Our procurement approach currently does not exclude companies or businesses from specific countries. At the time of the procurement process, there were no identified security risks, and that’s why the process went ahead as it did.” Ieraci said.

In June, the committee tabled its report to Parliament on its study of the competitive procurement process at the federal level, with nine recommendations.

The report, which focuses on the Nuctech deal, cautions against awarding contracts based primarily on price. It recommends placing “greater emphasis on best value for Canadians, by including value propositions that give greater weight to qualifications and quality rather than primarily focusing on price.”

Paul-Hus said if the Conservatives are elected, they will cancel the Stena contract and ensure the ferry is built in Canada.

The Epoch Times reached out to the Liberal Party for comment but did not hear back by the time of publication. While campaigning in Surrey, B.C., on Aug. 25, Prime Minister Justin Trudeau said his party is “concerned with this situation” and will continue to make improvements to the procurement process to “align with our values.”