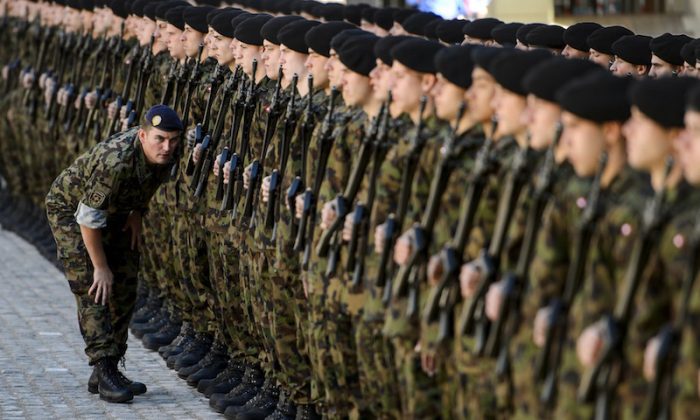 An officer checks the line of the Swiss honor guard prior to the arrival of Italian President Giorgio Napolitano on May 20, 2014 in Bern. (Fabrice Coffrini/AFP/Getty Images)
Europe

The Swiss Army has launched a preliminary investigation into an incident showing Swiss soldiers throwing stones at a new recruit.

The incident was captured on video and the footage was released last week by public broadcaster RSI.

A military spokesman said the army was aware of the video before it was released, according to a youtube account.

The army’s spokesperson Daniel Reist said the military is “troubled” by the incident, which was referred to as an “impromptu firing squad,” roughly translated from German, by RSI.

“The dignity of the recruits must be guaranteed at all times: what happened is unacceptable,” Reist said on Oct. 18, according to RSI.

The incident allegedly took place in September 2018 in Emmen, Lucerne. The soldiers are believed to be members of an “Anti-Aircraft Training Unit 33″—Der Lehrverband Fliegerabwehr 33 in German. It was alleged that those throwing the stones were ordered by their commanding offer to do so.

In the video, a voice can be heard, saying “Ready! … Fire!” Men in army uniform then forcefully hurl multiple stones at the young man, also in army uniform. There is laughter in the background.

The young victim did not report the incident but has been interviewed by authorities. He is from Ticino, an Italian-speaking region in southern Switzerland.

Results of the investigation are expected in the upcoming weeks.