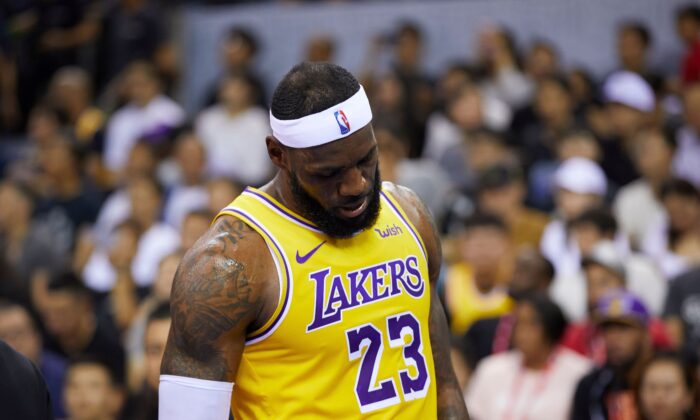 LeBron James reacts during a pre-season game between the Los Angeles Lakers and Brooklyn Nets in Shenzhen, in China's southern Guangdong Province, on Oct. 12, 2019. (STR/AFP via Getty Images)
Entertainment News

Los Angeles Lakers superstar LeBron James came under yet more scrutiny this week after his outburst during the playing of the U.S. national anthem during a game against the Clippers.

James was accused of being disrespectful as the “Star-Spangled Banner” played as he tried to pump up the crowd. It didn’t appear that he was trying to make a political protest of any kind.

“Let’s go!” James shouted in a video amid the playing of the anthem, which appeared to be finishing. Other Lakers players appeared to be standing and were waiting for it to end.

On social media and elsewhere, he faced backlash for “disrespecting” the anthem.

“If this was the Chinese anthem @KingJames would have showed the proper respect,” Barstool Sports founder Dave Portnoy tweeted, making note of James’ comments about the NBA-China conflict. James criticized Houston Rockets general manager Daryl Morey for expressing his support for the Hong Kong protesters.

“Yes, we do have freedom of speech, but at times there are ramifications for the negative that can happen when you are not thinking about others and only thinking about yourself,” James told reporters earlier this month. “I believe he wasn’t educated on the situation at hand and he spoke, and so many people could have been harmed not only financially but physically, emotionally, spiritually.”

His comments were heavily panned in the media, saying that he is ignoring China’s well-documented deplorable human rights situation.

A number of pro-democracy protesters in Hong Kong used James’ remarks as a motivator, creating memes and T-shirts showing James as Chairman Mao or driving a Chinese regime tank during the 1989 Tiananmen Square massacre that left thousands dead.

James addressed the fans after the loss, but he made no mention of the national anthem controversy.

“What an atmosphere it was last night! Laker Nation showed up and showed out! We owe y’all 1 and many more after that. Thank you for the support and know we’re going to make y’all proud to be a Laker fan,” he wrote on Instagram.

A number of users blasted him in the comments section, with one saying, “Respect our anthem you overpaid tool.”

“This guy is pure [expletive] when he disrespects the anthem but wont speak up about whats going on in Disgusting china (sic),” one said.