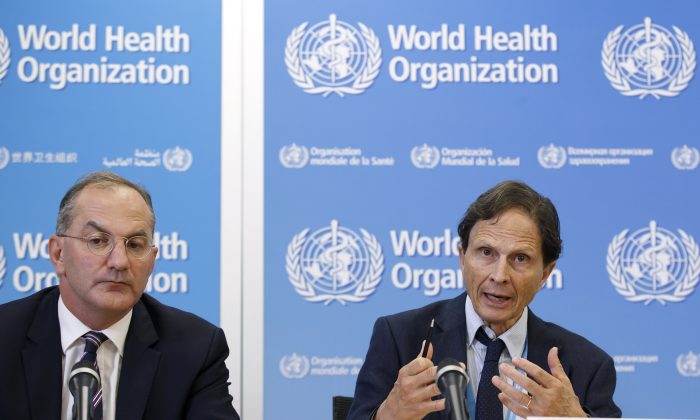 David Heymann, right, Chair of the Emergency Committee on Zika and observed increase in neurological disorders and neonatal malformation, sitting next to Peter Salama, left, Executive Director Outbreaks and Health Emergencies of the World Health Organization, WHO, informs to the media after the 4th meeting of the Zika Virus Infection and Possible Neurological Complications Emergency Committee, at the headquarters of the World Health Organization (WHO) in Geneva, Switzerland, Friday, Sept. 2, 2016. (Salvatore Di Nolfi/Keystone via AP)
International

GENEVA—The World Health Organization says the outbreak of Zika remains an international health emergency and that while the virus continues to hit new countries, experts still aren’t sure how big the risk is that pregnant women who catch the virus will give birth to brain-damaged babies.

The U.N. health agency convened its expert committee this week to assess the latest status of the epidemic.

Dr. David Heymann, the committee’s chair, said Friday that considerable gaps remain in understanding Zika and the complications it causes — including babies with serious neurological problems—and WHO concluded that the outbreak remains a global emergency.

“This extraordinary event is rapidly becoming, unfortunately, an ordinary event,” Heymann said, explaining that health officials around the world should prepare for the imminent arrival of the disease spread mostly by mosquitoes, but also through sex.

In the absence of any effective treatments or vaccines for the disease—and given past failures to wipe out the mosquitoes that mostly spread Zika—Heymann said it will largely be up to individuals to avoid infection.

“People have to assume responsibility for this on their own,” he said, adding that people at risk of the disease should wear long sleeves and insect repellent.

WHO said it was also unknown just how big the risk is for pregnant women. Although Zika has been proven to cause a range of neurological problems in babies, various studies have put the risk anywhere from 1 to 30 percent.

“We don’t have a definitive answer,” said Dr. Peter Salama, WHO’s director of emergencies. “The risk is relatively low, but significant.”

Despite Zika’s spread to more than 70 countries and territories, Brazil has the vast majority of cases of microcephaly, or infants born with abnormally small heads. Heymann said that studies are ongoing in the country and that the explanation could involve numerous factors.

“It could be all the way from genetic (factors) to nutritional to environmental contaminants,” he said.

Salama said officials are still trying to figure out whether the two known strains of the disease both cause microcephaly. So far, it is primarily the Asian strain of Zika, which is circulating in the Americas, that has been definitively linked to the severe birth defects.

In recent months, officials in Guinea-Bissau reported several microcephaly cases shortly before Zika was officially detected. Salama said that while Zika samples from the country appear to be from the African strain, it hasn’t been determined whether the African strain of the virus might also be responsible for the neurological problems.