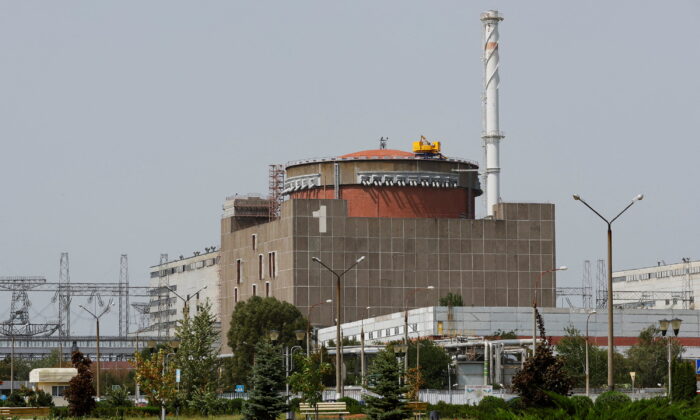 The United Nations’ nuclear watchdog agency urged Russia and Ukraine to set up a “security protection zone” near the Zaporizhzhia nuclear power plant as fears have escalated that nearby fighting could trigger a disaster not seen since the 1986 Chernobyl meltdown.

“We are playing with fire, and something very, very catastrophic could take place,” Rafael Grossi, who leads the International Atomic Energy Agency (IAEA), told the U.N. Security Council on Sept. 6.

Fighting near the facility, which was captured by Russia in March, is “very worrying [and] continues to be very worrying,” Grossi told CNN. “The shelling continues. So, indeed, we are still facing a very grave danger.”

After a recent visit to the plant, Grossi said that he could see visible signs of damage. However, he wasn’t sure which side was responsible or if both were to blame.

“I cannot make that determination. We don’t have the means to do that,” he told CNN, adding that assigning blame is beyond the capabilities and mandate of the IAEA. “But the mere fact that … people are hitting a nuclear power plant, the largest in Europe” poses a significant danger regardless, he said.

Russia’s ambassador to the United Nations, Vasily Nebenzya, said the recent shelling of the plant was Ukraine’s fault and Russian forces are protecting the facility. Earlier this week, Ukrainian officials said Russian shelling caused the plant to go offline.

“We regret that in your report … the source of the shelling is not directly named,” Nebenzya told the U.N. Security Council session.

While Ukraine President Volodymyr Zelenskyy on Sept. 6 offered some support for the proposal to create a demilitarized zone around the plant, he said he wanted more details.

“If the content of this proposal is to demilitarize the territory of the nuclear power plant—and this is logical, as it was the Russian military presence that put the Zaporizhzhia plant on the brink of a radiation disaster—then we can support such a demilitarized protection zone,” Zelenskyy said, according to The Guardian.

Officials in Ukraine are looking at the option of shutting down the Zaporizhzhia nuclear plant for safety reasons and are worried about the reserves of diesel fuel used for backup generators.

“The option of switching off the station is being assessed, if conditions necessitating the station to be switched off arise,” Oleh Korikov, the acting head of Ukraine’s State Nuclear Regulatory Inspectorate, told a news briefing by video link. He said that while the facility is supplying its own electricity needs, backup diesel generators would be needed if it remains disconnected; he gave no time frame for that eventuality.