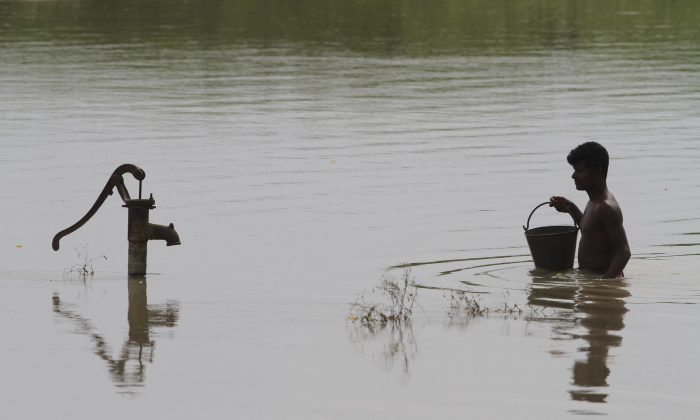 An Indian villager walks through floodwaters to collect drinking water from a hand pump in Burhaburhi village in the Morigaon district of north eastern Assam state, India. A UN report released, March, 20, 2015, warns that the world will suffer a serious shortfall of potable water by 2030 unless people and nations dramatically change the way they use the resource. (AP/Anupam Nath)
Asia & Pacific

UN Warns World Could Have 40 Percent Water Shortfall by 2030

NEW DELHI—The world could suffer a 40 percent shortfall in water in just 15 years unless countries dramatically change their use of the resource, a U.N. report warned Friday.

Many underground water reserves are already running low, while rainfall patterns are predicted to become more erratic with climate change. As the world’s population grows to an expected 9 billion by 2050, more groundwater will be needed for farming, industry and personal consumption.

The report predicts global water demand will increase 55 percent by 2050, while reserves dwindle. If current usage trends don’t change, the world will have only 60 percent of the water it needs in 2030, it said.

Having less available water risks catastrophe on many fronts: crops could fail, ecosystems could break down, industries could collapse, disease and poverty could worsen, and violent conflicts over access to water could become more frequent.

“Unless the balance between demand and finite supplies is restored, the world will face an increasingly severe global water deficit,” the annual World Water Development Report said, noting that more efficient use could guarantee enough supply in the future.

The report, released in New Delhi two days before World Water Day, calls on policymakers and communities to rethink water policies, urging more conservation as well as recycling of wastewater as is done in Singapore. Countries may also want to consider raising prices for water, as well as searching for ways to make water-intensive sectors more efficient and less polluting, it said.

In many countries including India, water use is largely unregulated and often wasteful. Pollution of water is often ignored and unpunished. At least 80 percent of India’s population relies on groundwater for drinking to avoid bacteria-infested surface waters.

In agriculture-intense India, where studies show some aquifers are being depleted at the world’s fastest rates, the shortfall has been forecast at 50 percent or even higher. Climate change is expected to make the situation worse, as higher temperatures and more erratic weather patterns could disrupt rainfall.

Currently, about 748 million people worldwide have poor access to clean drinking water, the report said, cautioning that economic growth alone is not the solution — and could make the situation worse unless reforms ensure more efficiency and less pollution.

“Unsustainable development pathways and governance failures have affected the quality and availability of water resources, compromising their capacity to generate social and economic benefits,” it said. “Economic growth itself is not a guarantee for wider social progress.”