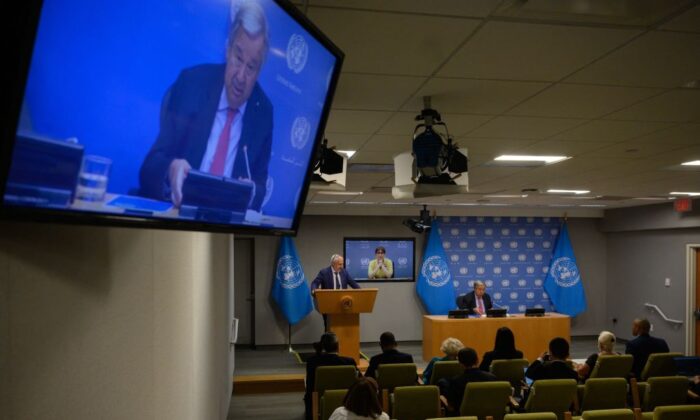 The United Nations has criticized the trend of “friend-shoring” and “reshoring” manufacturing operations, warning that it might endanger a global trading system that is already vulnerable.

Roughly 80 percent of the world’s traded goods are transported via the sea. In the past two years, the maritime industry has suffered from disruptions ranging from the COVID-19 outbreak, geopolitics, and the Russian war in Ukraine which have closed shipping routes and raised prices, the UN Conference on Trade and Development (UNCTAD) said in a statement on Nov. 29.

To build a resilient maritime industry, the agency warned against the focus on reshoring production at home or “friend-shoring” production from certain partners, insisting that such moves might not create a more resilient world.

“Trade is, at heart, not an issue of logistics. It is an issue of trust. And there are no quick fixes to building trust,” it said.

Due to prevailing supply-chain disruptions, businesses are considering whether to bring production back to or closer to home, UNCTAD said in its Review of Maritime Transport 2022 report.

In a June 2022 survey of logistics and supply chain executives, less than 20 percent of respondents said that globalization will create new supply-chain configurations based on “ally-sourcing.” Almost half believed reshoring and protectionism will make supply chains more localized and fragmented.

While arguing that complete deglobalization is not likely, the report admits that “gradual shifts in sourcing” are more likely.

Instead of only looking at low cost, companies are judging potential sources based on the concept of “best cost,” weighing production, and transportation costs against factors like the resilience of supply chains.

“The trade system is a very complex system,” Rebeca Grynspan, secretary-general of the UNCTAD, said in a briefing with reporters, according to Bloomberg. “If you try to get away from one part of the world, you create a huge disruption to the system. Everything changes.”

The UN criticism of friend-shoring and reshoring initiatives comes as the U.S. government is pursuing such efforts. During her recent trip to India to promote friend-shoring, Secretary of the Treasury Janet Yellen deemed the measure as critical to protect supply chains from unreliable nations like China and Russia.

The United States is “proactively deepening” economic integration with trusted trading partners like India, Yellen said, while insisting that Western companies are diversifying their supply chains.

“Our strategy will also create redundancies in our supply chain to mitigate over-concentration risks. And we are also addressing our reliance on manufacturers whose approaches clash with our human rights values,” she said.

Meanwhile, a report by the Reshoring Initiative published on Aug. 26 reveals that the number of jobs added to the United States from reshoring is on pace to hit around 350,000 this year, up from 260,000 in 2021.

That would be the highest number since the Reshoring Initiative, which lobbies to return manufacturing jobs to the United States, began tracking the data in 2010.

If the projected numbers turn out to be accurate, the total number of reshored jobs since 2010 will be more than 1.6 million.