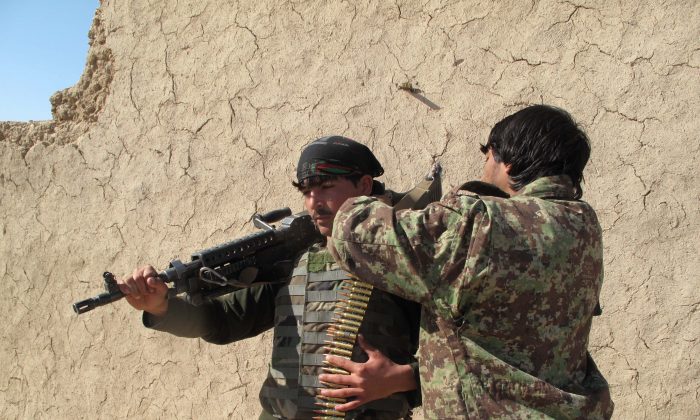 Afghan National Army (ANA) soldiers adjust their equipment in Helmand on Dec. 21, 2015. Clashes intensified on Dec. 21, as the Taliban pressed an offensive to capture a key district in Helmand, a day after an official warned that the entire southern province was on the brink of collapse. Local residents reported crippling food shortages in Sangin District, heartland of the opium harvest and long seen as a hornet's nest of insurgent activity, after the Taliban began storming government buildings on Dec. 20. (Noor Mohammad/AFP/Getty Images)
Middle East

UNITED NATIONS—The U.N. Security Council extended sanctions against the Taliban for 18 months in a resolution Monday that warned of the increasing presence of affiliates of the Islamic State extremist group in Afghanistan.

Nicholas Haysom, the U.N. envoy for Afghanistan, told reporters after briefing the council that the security situation in Afghanistan is “extremely challenging” with the most significant threat coming from the Taliban insurgency.

But he noted that while the Islamic State group, also known as ISIS, has only a limited presence at the moment, primarily in Nangahar Province in the east, it should not be underestimated.

“They certainly constitute a worrying factor, when they represent an alternative flagpole around which a large variety of disaffected groups can rally,” Haysom said.

The resolution, adopted unanimously, stressed the importance of ensuring that sanctions contribute to combatting the Taliban insurgency and restoring peace.

Haysom told the council that Afghan security forces “may be stretched to capacity but, for the most part, they are holding their ground.”

Afghanistan’s U.N. Ambassador Mahmoud Saikal, said his country hopes that Monday’s resolution and other U.N. resolutions targeting IS and other extremist groups “will further tighten the noose on the activities of al-Qaida, ISIS and the Taliban.”

He pointed to a “rapid growth” of IS in the east and other parts of Afghanistan and warned that the fight against “international terrorism and violent extremism” will have repercussions beyond his country’s borders.

Haysom and the council stressed the importance of political negotiations between the government and Taliban as the only route to peace.

He said the United Nations welcomes the Afghan government’s commitment to a peace process reiterated in Islamabad on Dec. 9 and called on the Taliban to reciprocate.

The U.N. is also encouraged by offers from Pakistan, the United States and China on that date to support face-to-face negotiations between government and Taliban leaders, he said.

Saikal, the Afghan ambassador, called the latest possible diplomatic breakthrough “a sign of hope” that must be matched with action against foreigners “driving terrorism and violent extremism.”