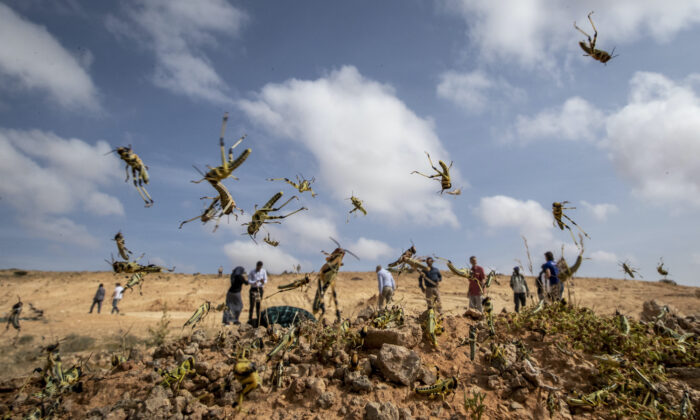 Young desert locusts that have not yet grown wings cover the ground in the desert near Garowe, in the semi-autonomous Puntland region of Somalia on Feb. 5, 2020. (Ben Curtis/AP Photo)
Africa

A United Nations official warned that an outbreak of tens of millions of locusts is spreading throughout East Africa and is ravaging its vital farmland, putting the lives of millions of people at risk.

The U.N.’s top humanitarian official, Mark Lowcock, said swarms of the insects crossed into Uganda overnight. And now, South Sudan and Tanzania, he said, are “on the watch list.”

“In this region, where there is so much suffering and so much vulnerability and fragility, we simply cannot afford another major shock. And that’s why we need to act quickly,” Lowcock said Feb. 10, according to a U.N. news release. “We do have a chance to nip this problem in the bud, but that’s not what we’re doing at the moment. We’re running out of time.”

At the same time, the locusts are putting a strain on an already hard-hit region, according to the intergovernmental organization. Sudan and Somalia faced famine threats in 2017, and in the past two years, droughts, poor rains, and even floods have affected communities in the region.

Such conditions, the U.N. official argued, create “the environment to facilitate the current locust outbreak.”

And across the region, the swarms have the potential “to be the most devastating plague of locusts in any of our living memories if we don’t reduce the problem faster than we’re doing at the moment,” he said, according to NBC News.

Keith Cressman, the U.N. Food and Agriculture Organization’s senior locust forecasting officer, provided an update on the swarms in Kenya, adding that they have emerged from the Horn of Africa since the start of 2020.

To combat the swarms, Ugandan authorities said they have transported pesticides to affected areas. Thousands of people have been mobilized.

“We are using motorized sprayers, a drone, and manual sprayers,” Stephen Byantwale, the commissioner for crop protection at the ministry of agriculture, told The Guardian. “They [locusts] are spreading like wildfire, so they are a real, major threat.”

Locusts are a collection of several species of short-horned grasshoppers in the family Acrididae. The insects are generally solitary but under some conditions, they can become abundant and swarm.