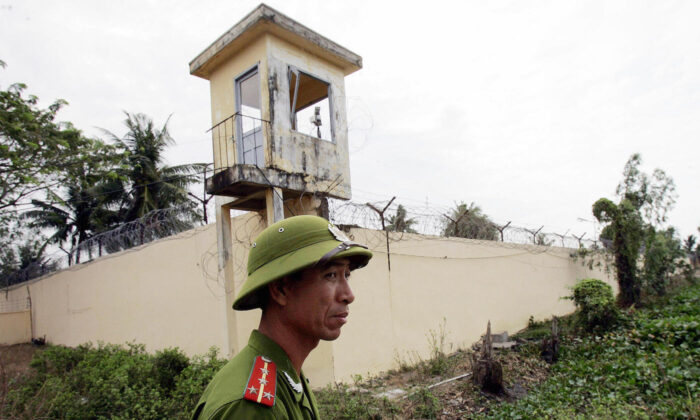 A 2006 file image of a Vietnamese policeman standing watch outside the Phuoc Co jail on the outskirts of the southern coastal town of Vung Tau. (Hoang Dinh Nam/AFP via Getty Images)
Asia & Pacific

The U.N. High Commissioner for Human Rights (OHCHR) has prompted Vietnam authorities to stop violating “fundamental freedoms” and called for the immediate release of four rights and land activists who were jailed for “spreading anti-state propaganda.”

“We are deeply troubled by the harsh sentencing of human rights and land rights defenders convicted of spreading anti-state propaganda in Vietnam,” Shamdasani said at a press briefing in Geneva on Friday.

On Tuesday, a Hanoi court sentenced prominent dissident journalist Pham Doan Trang to nine years in prison over her conviction of “conducting propaganda against the state.”

The fourth activist, Do Nam Trung, who was known for his involvement in anti-China protests and criticism of government corruption, was sentenced to 10 years in prison for the same offense on Thursday.

Meanwhile, Vietnamese journalist Le Hong Trung was detained for the same charges since March without access to a lawyer and his family. Trung, who had announced his intention to run for political office as an independent, is set to face trial on Dec. 31.

“We urge the authorities in Vietnam to immediately release all these individuals as well as the many others arbitrarily detained for exercising their rights to freedom of opinion and expression,” Shamdasani said.

The criminal code under which these charges were brought is “overly broad” and “inconsistent with international human rights norms”, she added, calling for the Vietnamese government to “repeal all legal provisions that violate fundamental freedoms.”

“All the cases follow similar worrying patterns that raise serious issues concerning the presumption of innocence, the legality of their detention, and the fairness of their trial,” Shamdasani noted.

“There is prolonged incommunicado pre-trial detention, prosecution under the vaguely worded offense of ‘spreading anti-state propaganda,’ denial of access to legal counsel and closed trials that do not respect international fair trial standards.”

The European Union (EU) has also called for the release of all human rights defenders in Vietnam and urged the authorities to allow them to have “a fair trial.”

“The numerous arbitrary arrests of peaceful protesters and journalists are a direct contradiction to international human rights law,” EU said in a statement on Thursday, pledging to work with the authorities to improve the country’s human rights situation.