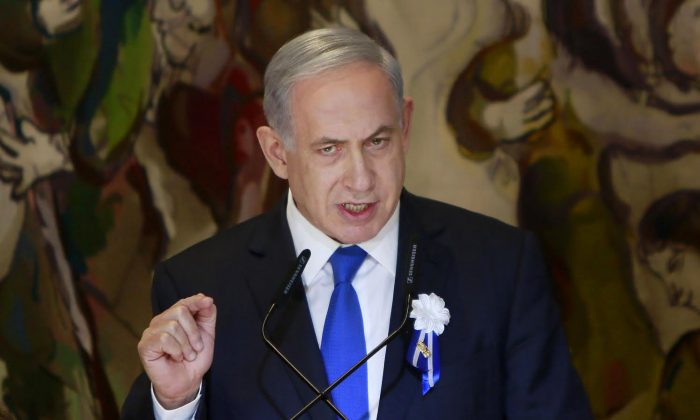 “This deal doesn’t make peace more likely,” he told world leaders at the U.N. General Assembly. Through releasing billions of dollars in sanctions relief to Iran, he said, “it makes war more likely.”

Israel failed to prevent the international deal, despite intense lobbying by its allies in Washington. Iran denies any interest in nuclear weapons and describes its atomic activities as describes its program as focused only on generating energy, and advancing science and medicine.

He listed what he said were disruptive actions by Iran even as the deal was being negotiated: shipping weapons and proxy fighters to Syria; arms to Yemen and to Hezbollah in Lebanon; sending top Iranian military officers to the Golan Heights, and threatening to topple Jordan’s government.

“Iran’s been doing all of this… just in the last six months, when it was trying to convince the world to remove the sanctions,” Netanyahu said. “Imagine what Iran will do after those sanctions are lifted.”

Israel, Netanyahu said, “will not allow Iran to … sneak in to the nuclear weapons club.”

Disputing the U.S. view, Netanyahu said the nuclear deal, leaves Iran just weeks away from being able to make a bomb — “but Israel.

The Israeli prime minister also blamed lack of progress in talks with the Palestinians on President Mahmoud Abbas, saying that Israel was ready to return to negotiations any time.

On Wednesday, Abbas told the assembly that the Palestinians should no longer be bound by agreements with Israel that were meant to form the basis for a two-state solution to the Middle East conflict. Abbas’ speech reflected growing Palestinian frustration and appeared aimed at focusing the attention of the international community — busy with the Syrian civil war and the migrants’ crisis in Europe — on the long-festering Israeli-Palestinian conflict.