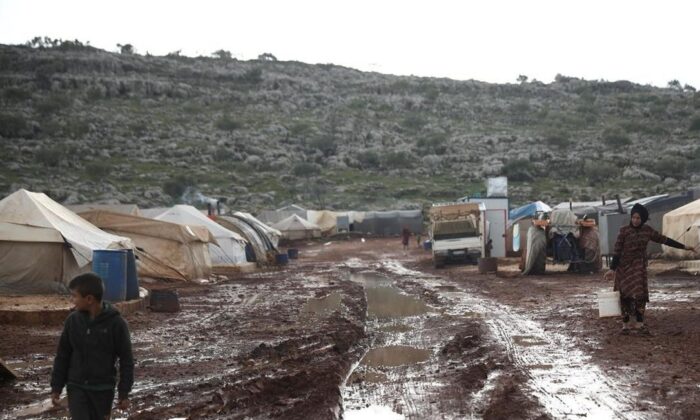 Syrian refugees walk through a camp for the displaced muddied by recent rains near the village of Kafr Aruq, in Idlib province, Syria, on Jan. 28, 2021. A United Nations rights' advocate and Human Rights Watch Canada say the Trudeau government isn't living up to its new international campaign against arbitrary detention because it is abandoning 25 Canadian children trapped in northern Syria. (Ghaith Alsayed/AP/The Canadian Press)
Canada

UN, Rights Watchdogs Urge Canada to Save Its ‘Arbitrarily Detained’ Children in Syria

Fionnuala Ni Aolain, the UN Special Rapporteur for the Protection and Promotion of Human Rights while Countering terrorism, says Canada is one of 57 countries on a “list of shame” because it won’t take active steps to repatriate its foreign nationals trapped in Kurdish-controlled camps in northern Syria.

But Deif says the federal government’s decision not to pursue the repatriation of 46 Canadians—25 of them children as young as two years old—from a squalid refugee camp in northern Syria simply undercuts the intent of the new declaration.

Deif will join Ni Aolain and other rights groups at the House of Commons foreign-affairs committee later today, where they will renew their calls for the government to do more to bring back its stranded nationals in Syria.

“Their detention is undeniably arbitrary and involves no due process or protection. These declarations mean nothing unless they are implemented in practice for the most vulnerable,” Ni Aolain told The Canadian Press in an emailed response to questions.

The government managed to repatriate a five-year-old orphaned Canadian girl from Syria this past October, but Prime Minister Justin Trudeau and other ministers indicated they had no plans to help the other Canadians because the government doesn’t have diplomats in the war zone.

“It’s really astounding when the government announced on Monday this declaration against arbitrary detention in state-to-state relations, while at the same time, for two years, it’s turned a blind eye to the arbitrary detention of 46 of its own nationals,” Deif said in an interview.

The Canadians are among the estimated 10,000 foreign nationals who are being held in camps in northern Syria by Kurdish forces after they won back the war-torn region from the Islamic State in Iraq and the Levant.

The Kurds rounded up about 64,000 people after they vanquished the five-year-old ISIL caliphate. The Kurds suspected many of them of being ISIL sympathizers, but Deif and other human-rights advocates argue that none of them have been formally charged with any crime.

“There could be perpetrators of ISIS and high-level officials that are involved. There could be trafficking victims, victims of ISIS. Certainly, the children are innocent,” said Deif.

The Kurds have been calling on foreign governments to repatriate their people.

In a Feb. 8 statement, the Office of the United Nations High Commissioner for Human Rights called on the 57 countries to take action to repatriate their people, who are facing increased threats, including sexual exploitation. It was signed by Ni Aolain and almost two dozen other UN special rapporteurs—a group of independent experts appointed by the UN to deal with protecting different aspects of human rights.

“It is a list of shame and it behooves Canada to follow the example of other states to take decisive and immediate action and return their nationals,” said Ni Aolain.

Last fall, after Canada successfully repatriated the five-year-old orphan girl, then foreign affairs minister Francois-Phillipe Champagne said the government periodically checks on the well-being of Canadians but otherwise there’s been no change in the overarching government approach to the issue.

“Our first and foremost concern is to ensure the safety and security of Canadians here at home,” Champagne said at the time.

Ni Aolain said Canada has a strong enough legal and security system to get its people out of Syria.

“This is a small number of nationals, the majority of whom are children, who are victims of terrorism. It is deeply distressing to have a country name its most vulnerable children as a security threat, and Canada should lead by example, protecting the rights of the child in word and deed.”

Deif laid the blame for Canada’s inaction squarely on Trudeau.

“The prime minister does not want to spend political capital to return a group of Canadians with suspected ISIS ties,” said Deif, using the other acronym associated with ISIL.

“The government’s announcement of this declaration against arbitrary detention is welcome. And it’s important. But at the same time, this government has turned a blind eye for over two years now to the arbitrary detention of its own nationals in northeast Syria—women, men and children, most of whom are under the age of six.”