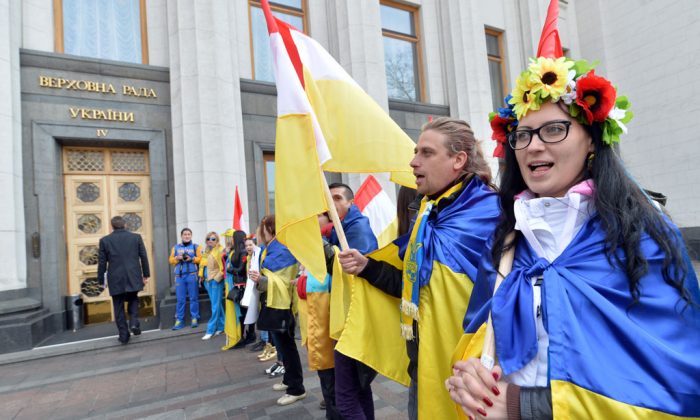 Protesters rally outside the Ukrainian Parliament in Kiev on April 15, 2014, during a session as they demand from the authorities actions against separatism on the eastern part of the country. Russian Foreign Minister Sergei Lavrov on Tuesday warned Kiev against using force to quell pro-Moscow separatists in eastern Ukraine, saying the 'criminal' act would undermine talks planned in Geneva. (Sergei Supinsky/AFP/Getty Images)
International

The UN Office of the High Commissioner for Human Rights has released a report on the human rights situation in Ukraine. It outlines the main areas of concern and needs for action, and sets out a framework for UN monitoring in the country, including through the newly established United Nations Human Rights Monitoring Mission in Ukraine.

The report takes a long view of the root causes of the crisis, including widespread corruption, expanding economic inequalities, weak institutions, and lack of accountability for recent and past human rights violations. But some of its preliminary findings are clearly meant to have a short-term impact: to shut down certain politically manipulative narratives about the crisis and to steer a path towards a constructive, inclusive national dialogue.

The report acknowledges the imperative to protect minorities in Ukraine, including the Russian group, but effectively demolishes Putin’s argument that the Russians in the country have been subjected to severe and systematic threats by the post-Yanukovych leadership.

The UN human rights watchdog accounts for cases of incitement to intolerance and hatred against members of the Russian minority and other minorities, but resolutely dismisses the claim that they were either widespread or systemic. Tellingly, the “Right Sector”, an umbrella organisation of Ukrainian nationalist groups widely held to have historical ties with Nazi collaborators in World War II, is reported to have been behind several attacks on political opponents and former ruling party figures – but not to have carried out attacks against minority groups or the Russian group in particular.

A similar finding on ethnic Russians in Crimea leaves no space for speculation: “Photographs of the Maidan protests, greatly exaggerated stories of harassment of ethnic Russians by Ukrainian nationalist extremists, and misinformed reports of them coming armed to persecute ethnic Russians in Crimea, were systematically used to create a climate of fear and insecurity that reflected on support to integration of Crimea into the Russian Federation.”

Distortion of facts aside, the political problem remains a painful one. A lack of effective political participation by national minorities, including the Russian community, and the volatile situation of minority language rights are some of the areas singled out for immediate action by Kiev.

Minority participation seems to be the more pressing challenge. True, parliament’s February attempt to repeal the 2012 language law – a move generally condemned as a mistake and vetoed by the Acting President Turchnyov – fuelled concerns amongst ethnic Russians and other groups about the fate of their languages in Ukraine. But as it stands, the law still favours the larger groups, and does little to accommodate the smaller ones. No wonder the UN and other international organisations have implored Kiev to consult with minority representatives before any further legislation is tabled or passed.

The crucial unknown in the wake of the crisis is how much effective political clout Kiev will allow minority groups (and especially the Russian community) to gain. The current government is largely seen as staffed by politicians from western and central Ukraine, at the expense of eastern and southern representation. Minority participation at the regional level remains weak, an issue further exacerbated by the collapse of the Party of Regions in the east.

The Council of Europe has been vocal in advocating a new electoral system to increase local representation, but the government’s low inclusiveness, coupled with Russia’s annexation of Crimea, raises the stakes for a lasting political solution. The UN report calls for immediate action to ensure the inclusion and participation of “all minorities and indigenous peoples” (read: the Tatar community in Crimea). But how far can the government go to safeguard their rights?

In human rights terms, there is nothing standing in the way of nation-wide special electoral rules, or various forms of local self-government. Moscow, for its part, seems hellbent on the federalisation of the country. But calls for some kind of “sovereignty” devolved from the centre, along the lines of what Crimea attempted in 1992, will be met with stiff opposition from Kiev, and for good reasons. Participation through devolution can work if there is a genuinely shared interest in a civic common project, one that nurtures and respects diversity and the rights of others. Both European and non-European autonomy arrangements – from Italy’s South Tyrol to Canada’s Quebec – are among several precedents for that.

While the UN report effectively demolishes Putin’s claim that ethnic Russians in Ukraine are being persecuted, it is equally clear that Ukraine’s future depends largely on Kiev’s willingness and ability to operate as a credible driving force of inclusion and diversity.

With the risk of violence looming large once again and the uncertain fate of diplomatic efforts, one can only hope that the planned UN work on the ground will at least reduce the serious risk the report identifies – “competing narratives being manipulated for political ends, leading to divisiveness and incitement to hatred.”

Gaetano Pentassuglia has received funding from a range of sources and his research is fully independent.