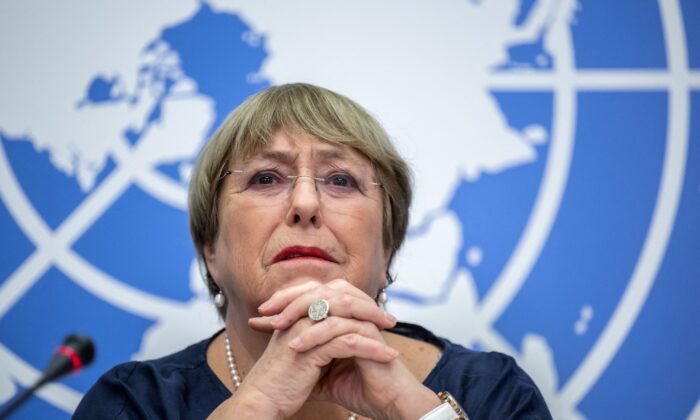 On Aug. 31, the United Nations Office of the High Commissioner for Human Rights (OHCHR) released a highly anticipated report on the ongoing human rights violations and abuses targeting Muslim Uyghurs and other ethnic and religious minorities in Xinjiang, China.

Released within the final minutes of Michelle Bachelet’s term as U.N. High Commissioner for Human Rights, the report concludes, that, in Xinjiang, “serious human rights violations have been committed.”

Although the OHCHR regrettably stopped short of determining that the Chinese Communist Party’s targeting of millions is genocide, and even permitted the Party to water down some of the language, the report is a consequential step forward toward advancing freedom in Xinjiang.

According to the report, the Chinese Communist Party’s “arbitrary and discriminatory detention” placed in the context of its “restrictions and deprivation more generally of fundamental rights” could amount to “international crimes, in particular crimes against humanity.”

Further, the report determined that the allegations of detainees being subjected to torture, adverse conditions, forced medical treatments, and sexual and gender-based violence are credible.

These findings are not novel, as journalists, researchers, activists, survivors, and governments have bravely and systematically uncovered evidence leading to similar and even more dire conclusions.

However, what makes this report significant is that it was released.

Consider the Chinese Communist Party’s diligent and determined efforts to increase its influence at the United Nations.

For example, recall that in the summer of 2019, in response to more than 20 countries issuing a joint statement of concern over the Party’s targeting of Uyghurs, U.N. ambassadors from nearly 40 countries signed a letter defending the Party’s actions in Xinjiang and its human rights “achievements.”

Additionally, in November 2021, a whistleblower was fired after revealing that the OHCHR was sharing the names of dissidents—including Uyghurs—with the Communist Chinese regime.

Despite the Chinese Communist Party’s best efforts to maneuver, intimidate, and propagandize in hopes that the international community would ignore its ongoing atrocities, the evidence and facts have become so overwhelmingly clear that the U.N.’s leading body on human rights was forced to take a position.

Even though the report is not perfect, as Adrian Zenz, senior fellow in China studies at the Victims of Communism Memorial Foundation, said, “[I]t will provide a strong and authoritative basis going forward for holding Beijing accountable.”

Ultimately, the release of the U.N. report on Xinjiang makes it impossible to ignore or excuse the ongoing abuses perpetrated by the Party in Xinjiang.

As American Foreign Policy Council Fellow Michael Sobolik, said, “The UN has finally published its long-anticipated report, but white papers and multilateral investigations will not stop a genocide. Governments around the world need to step up and hold the Chinese Communist Party accountable, and the United States must lead that effort.”

These two laws give the United States the necessary tools for eliminating goods produced by forced labor in Xinjiang from America’s supply chains and for holding Chinese officials accountable.

But, as columnist Josh Rogin recently reported in The Washington Post, the Biden administration hasn’t enforced the Uyghur Human Rights Policy Act, leading to frustration in Congress. Under this law, the president is to identify and impose sanctions on Chinese officials engaged in the targeting of Uyghurs and their families.

Additionally, Rogin reported that the implementation of the Uyghur Forced Labor Prevention Act—which requires that importers prove that goods coming from Xinjiang are not made with forced labor—has been “spotty.” He pointed out that in the Washington metropolitan area, for example, grocery shoppers can purchase red dates from Xinjiang that are produced by a state-run paramilitary organization and are prohibited under the law.

The United States must enforce the Uyghur Human Rights Policy Act and the Uyghur Forced Labor Prevention Act and encourage our allies and partners to adopt similar legislation.

It is overwhelmingly clear that the horrific plight of the Uyghurs and other ethnic and religious minorities in Xinjiang cannot be ignored.

The report released by the U.N. Office of the High Commissioner for Human Rights on Aug. 31 should be regarded as a clarion call to action for countries around the world to hold the Chinese Communist Party accountable for its egregious human rights violations and abuses.