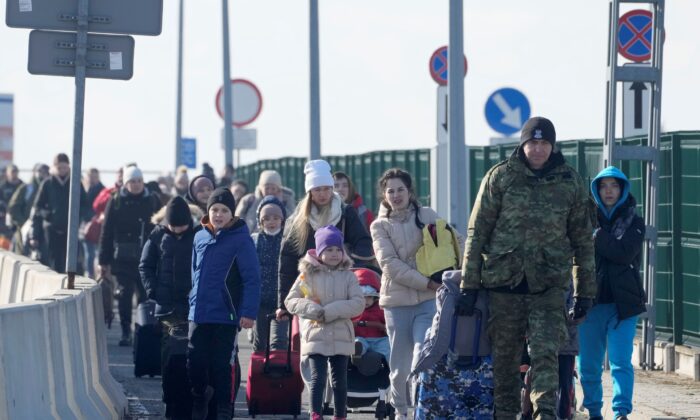 A Polish border guard assists refugees from Ukraine as they arrive to Poland at the Korczowa border crossing, Poland, on Feb. 26, 2022. (Czarek Sokolowski/AP Photo)
Russia-Ukraine War

WARSAW, Poland—Nearly 120,000 people have so far fled Ukraine into Poland and other neighboring countries in the wake of Russian invasion, the U.N. refugee agency said on Saturday.

Poland has declared its border open to fleeing Ukrainians, even for those without official documents.

On Saturday a government official also said that the country sent a hospital train that will pick up those wounded in the war in Mostyska, in western Ukraine, and bring them to Warsaw for treatment.

The hospital train departed the border town of Przemysl and has five carriages adapted to transport the wounded and four stocked with humanitarian aid for Ukraine’s Lviv district.

“Almost 116,000 have crossed international borders as of right now. This may go up, it’s changing every minute,” said Shabia Mantoo, the spokeswoman of the U.N. High Commissioner for Refugees. “It’s very fluid and changing by the hour.”

The agency expects up to 4 million Ukrainians could flee if the situation deteriorates further.

Those arriving were mostly women, children, and the elderly after Ukrainian President Volodymyr Zelenskyy on Thursday banned men of military age from leaving the country.

Mantoo said most were heading to neighboring Poland, Moldova, Hungary, Romania, and Slovakia, and even some into Belarus—from which some Russian forces entered Ukraine.

She did not immediately have details on numbers by country, but by far the largest numbers were arriving in Poland, where some 2 million Ukrainians have already settled to work in recent years, driven away by Russia’s first incursions into Ukraine in 2014 and seeking opportunities in the booming economy of the European Union neighbor.

Poland’s government said Saturday morning that more than 100,000 Ukrainians had crossed the Polish-Ukrainian border in the past 48 hours.

At the Medyka border crossing, a line of vehicles waiting to enter Poland stretched 15 kilometers (9 miles) into Ukraine, according to people crossing the border, Polish broadcaster TVN24 reported.