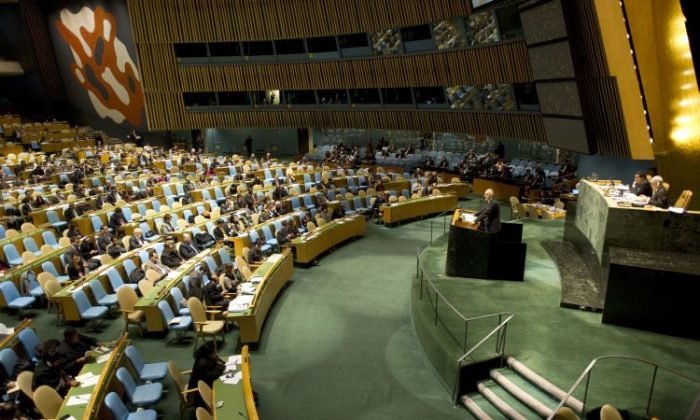 Syria's Ambassador to the UN Bashar al-Ja'fari speaks to the General Assembly after a report by the High Commissioner for Human Rights regarding Syria Feb. 13  in New York. (Don Emmert/AFP/Getty Images)
Middle East

Several top officials in the Syrian regime are suspected of responsibility for committing crimes against humanity, including murder, torture, arbitrary detentions, and other abuses, a United Nations human rights panel said in a report on Thursday.

Damascus has “manifestly failed in its responsibility to protect its people,” the report states, adding that since November, “its forces have committed more widespread, systematic and gross
human rights violations.”

Furthermore, Syrian authorities at the highest level have knowledge and consent about security forces committing crimes against humanity. The report said that Syrian security forces have shot and killed unarmed civilians, including women and children, as well as tortured protesters.

Syria has become increasingly tense and militarized since November, the report notes, after the last U.N. report was issued about the situation.

The panel also said that anti-government forces, which likely includes the Free Syria Army, a group comprised of army defectors, “have also committed abuses, although not comparable in scale and organization to those carried out by the state.”