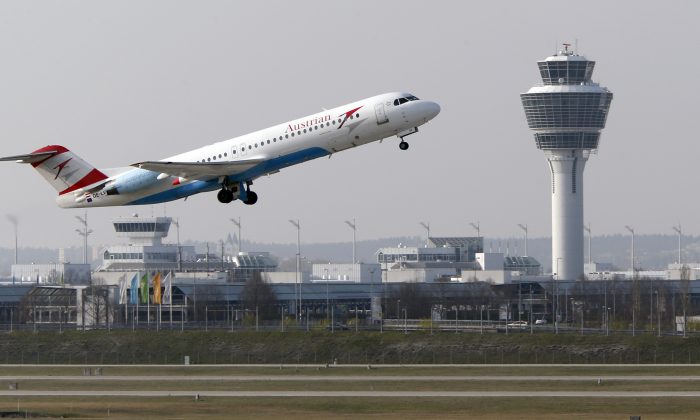 A Austrian Airlines airplane takes off from the airport in Munich, southern Germany, on April 1, 2014. (AP Photo/Matthias Schrader)
International

WASHINGTON—A U.N. panel on Monday approved a temporary ban on cargo shipments of rechargeable lithium batteries on passenger planes because they can create intense fires capable of destroying an aircraft.

The decision by the Montreal-based International Civil Aviation Organization’s top-level governing council isn’t binding, but most countries follow the agency’s standards. The ban is effective on April 1.

“This interim prohibition will continue to be in force as separate work continues through ICAO on a new lithium battery packaging performance standard, currently expected by 2018,” said Olumuyiwa Benard Aliu, the ICAO council’s president.

Namrata Kolachalam, a U.S. Transportation Department spokeswoman, called the ban “a necessary action to protect passengers, crews, and aircraft from the current risk to aviation safety.”

Lithium-ion batteries are used in a vast array of products from cellphones and laptops to some electric cars. About 5.4 billion lithium-ion cells were manufactured worldwide in 2014. A battery is made up of two or more cells. A majority of batteries are transported on cargo ships, but about 30 percent are shipped by air.

Airlines flying to and from the U.S. that accept lithium battery shipments carry 26 million passengers a year, the Federal Aviation Administration estimates. The ban doesn’t apply to batteries packaged inside equipment like a laptop with a battery inside, for example.

PRBA — The Rechargeable Battery Association, which opposed the ban, said in a statement that the industry is preparing to comply with the ban, but there may be “significant disruption in the logistics supply chain,” especially for batteries used in medical devices.

Aviation authorities have long known that the batteries can self-ignite, creating fires that are hotter than 1,100 degrees. That’s near the melting point of aluminum, which is used in aircraft construction.

Safety concerns increased after FAA tests showed gases emitted by overheated batteries can build up in cargo containers, leading to explosions capable of disabling aircraft fire suppression systems and allowing fires to rage unchecked. As a result of the tests, an organization representing aircraft manufacturers — including the world’s two largest, Boeing and Airbus — said last year that airliners aren’t designed to withstand lithium battery fires and that continuing to accept battery shipments is “an unacceptable risk.”

More than other types of batteries, lithium-ion batteries are susceptible to short-circuit if they are damaged, exposed to extreme temperatures, overcharged, packed too close together or contain manufacturing defects. When they short-circuit, the batteries can experience uncontrolled temperature increases known as “thermal runaway.” That, in turn, can spread short-circuiting to nearby batteries until an entire shipment is overheating and emitting explosive gases.

It’s not unusual for tens of thousands of batteries to be shipped in a single cargo container.

Shocking: How Flu Particles Spreads After Sneezing on an Airplane

Since 2006, three cargo jets have been destroyed and four pilots killed by in-flight fires that accident investigators say were either started by batteries or made more severe by their proximity. The International Federation of Air Line Pilots Associations lobbied the ICAO council unsuccessfully to extend the ban to cargo carriers.

“This has been a long time coming, and is justified by the risk these batteries pose in transportation,” said Mark Rogers of the Air Line Pilots Association in North America. “We now call on ICAO to recognize that the same risk is present on cargo aircraft and to extend the prohibition to all aircraft, until safe methods of transport can be implemented.”

Besides the ban on shipments on passenger planes, the ICAO also approved a requirement that batteries shipped on cargo planes be no more than 30 percent charged, and imposed new limits on small packages of batteries.

Dozens of airlines have already voluntarily stopped accepting battery shipments, but others oppose a ban. KLM, the royal Dutch airline, made a presentation to a lower-level ICAO panel arguing against a ban, according to an aviation official familiar with the presentation. KLM and Air France are owned by a Franco-Dutch holding company. Representatives from the Netherlands and France on the dangerous goods panel voted last fall against a ban.

The official wasn’t authorized to speak publicly and spoke on the condition that he not be named.

ICAO’s decision frees the Transportation Department to begin work on regulations to impose a ban. A law passed by Congress in 2012 at the behest of industry prohibits the department from issuing any regulations regarding air shipments of lithium batteries that are more stringent than ICAO standards unless there is a crash that can be shown to have been started by batteries. Since most evidence in crashes is destroyed by fire, that’s virtually impossible to do, critics of the provision say.

Rep. John Mica, R-Fla., who authored the provision, has said that since batteries are an international industry there should be a single, international standard because it would be too confusing for shippers to follow multiple rules.